'Tess had to give up her life to catch a monster,' Richey's mom says after Schlatter sentenced to life in prison

The mother of murdered Toronto woman Tess Richey says the man who killed her “kind” and “generous” daughter knew exactly what he was taking from the world when he ended her life.

“You would get to spend 10 minutes with Tess and you would know what a beautiful, loving being she is. He got to spend the last two hours with Tess… and he knew what he took,” Richey’s mother Christine Hermeston said outside a Toronto courthouse following 23-year-old Kalen Schlatter’s sentencing hearing on Wednesday.

“Sadly Tess had to give up her life to catch a monster, but we got the monster.”

Schlatter, who has been sentenced to life in prison without the chance of parole for 25 years, listened to a series of emotional victim impact statements by Richey’s loved ones on Wednesday.

A tearful statement was delivered by Hermeston, who was the one to discover her daughter’s body abandoned in an outdoor stairwell of a building under renovation in the city’s Church-Wellesley Village on Nov. 29, 2017, four days after Richey was killed.

'She was going places'

Richey’s mother described her daughter as a kind and generous person who loved people and nature and who advocated for the rights of animals.

Hermeston said Richey, who was the youngest of five girls, was “ambitious” and “never let anything stop her for long.”

"I miss our long walks, the feeling of her hand in mine, the sounds of her voice, the way she called me dear. I will miss her unique sense of humour, the way she made me laugh like no one else can, our shopping trips and treasure hunts at the Salvation Army— I will miss everything about her."

Hermeston added that the calendar on her kitchen wall remains on November 2017.

“I will never change it because I will never move on without my Tess. I will never be the same mother, the same grandmother, neighbour, or friend because of what he did to all of us,” she said. 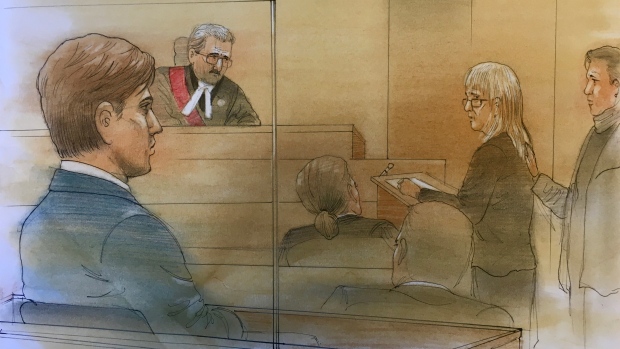 The Crown previously told the court that Schlatter sexually assaulted and strangled Richey in the early morning hours of Nov. 25, 2017.

Prosecutors said Schlatter murdered Richey and left her body in an outdoor stairwell after she refused to have sex with him.

Richey had been out with a friend that night at a popular bar in the city's gay village and she met Schlatter outside the establishment after last call.

Shortly after 4 a.m., the two were seen on camera walking hand-in-hand down a dark laneway toward the stairwell where her body was eventually found.

After Richey's body was discovered days later, Schlatter’s semen and saliva were found on her clothing.

During his trial, Schlatter testified that his sexual encounter with Richey was consensual and the victim was alive when he left her in the stairwell that morning.

But one of Schlatter’s former cellmates refuted that claim, telling the court that Schlatter confided in him about the murder and admitted to choking Richey to death with a scarf before ejaculating on her body.

He also said Schlatter told him he stole a necklace from Richey after killing her and took money from her purse for a cab ride home.

Richey’s sister Rachel told the court Wednesday that on the morning Tess died, she was “weakened forever.”

“On that morning, before I was even awake, I was ripped in half,” she said. “I have no idea who I am anymore.”

She said life without her sister is “grey” and filled with “a deep, heavy sadness.”

“Laughter is hollow, the smiles hurt, and we’re always a kind word or knowing eye away from our sorrow," Rachel Richey continued.

Varina Richey, the eldest of the five siblings, said her baby sister was destined to achieve "great things."

"Tess was a beloved daughter, sister, friend, student, (and) dog mom. You thought she did not matter but oh how wrong you were Mr. Schlatter," she said.

“(She) befriended a stranger and paid with her life in a stairwell."

Schlatter shed no tears for his victim, judge says

Schlatter was found guilty of first-degree murder on Monday after three days of jury deliberations.

Justice Michael Dambrot, who presided over the seven-week trial, described Schlatter as a young man with an appetite for rough sex who preyed on women.

He told the court that Schlatter shed no tears for Richey or her family and deserved the sentence he was given.

Speaking after the sentencing on Wednesday, Varina Richey said her family has experienced a “horrifying ordeal” over the last three years.

“I wouldn’t wish this on any family. From start to finish…it has just been a really exhausting and long process. It is nice to finally put it behind us but it feels in a way like we are putting Tess behind us too,” she said.

“I’m just glad that he is off the streets now too and nobody else can be hurt by him again.”