The vaccine hangover: Experts weigh in on why some people have side-effects 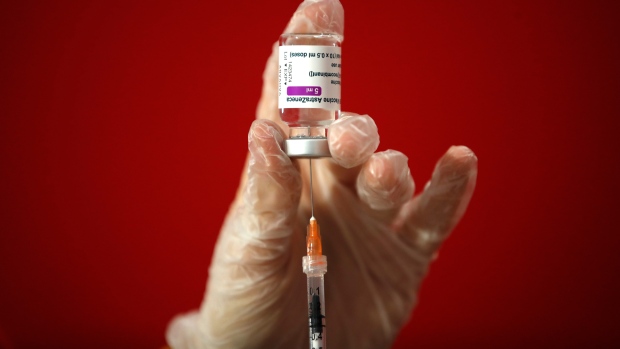 FILE - In this Monday, March 8, 2021 file photo a health worker shows the media how she prepares a dose of the AstraZeneca vaccine to be administered to a patient. (AP Photo/Alessandra Tarantino, File)

When Craig Silliphant was waiting in line to get his COVID-19 vaccine shot, he was aware the dose going into his arm could leave him with some side-effects.

The Saskatoon culture commentator says he has experienced some self-inflicted legendary hangovers in his life. So, the possibility of a "vaccine hangover" in exchange for a dose that would keep him and his family safe was an easy choice.

"I'd like to think all the training and drinking I've done throughout my life ... had some positive effect on how I felt," Silliphant says with a laugh.

The day after receiving the Oxford-AstraZeneca vaccine, he had a sore arm but soon after "felt like a million bucks." Two friends who got the same vaccine at the same time, however, developed flu-like symptoms for about 24 hours, he says.

As more Canadians get vaccinated each day, some are reporting a range of side-effects.

Some people have a bit of pain and swelling in the area they received the shot. But a smaller number might also experience tiredness, headache, muscle pains, chills, fever or nausea.

These symptoms now have the informal title of the "vaccine hangover."

Jason Kindrachuk, assistant professor in the department of medical microbiology and infectious diseases at the University of Manitoba, says immune systems are complex and very individualized.

"It's tough to predict how somebody is going to respond to something like vaccination," he says.

Occasional side-effects are common among a lot of vaccines, not just the ones for COVID-19.

Across demographics, including gender and age, there are different immune responses based on biological differences, Kindrachuk says. Some people are just more likely to have a strong response to stimulation of their immune system from a vaccine.

A study published this week in The Lancet, a medical journal, found 13.5 per cent of people reported side-effects after one dose of Pfizer-BioNTech and 22 per cent reported it after their second dose.

It found a larger number of people -- 37.7 per cent -- reported side-effects after getting their first dose of AstraZeneca.

Headache and fatigue were more common in women and all side-effects were more likely if people had previously been infected with COVID-19.

It also found people younger than 55 were more likely to have side-effects.

Dr. Joseph Blondeau, head of clinical microbiology at Royal University Hospital in Saskatoon, says that may be because younger people have a more robust immune system that's quicker to respond.

He adds that stronger side-effects among some people during their second dose is likely because a person's body has already been primed by the first dose.

"The body is responding quicker and more aggressively because it's recognized something it has seen before and that is what the body is supposed to do," he says.

Blondeau himself felt more tired and sore from getting vaccinated than his wife, who went at the same time and got the same vaccine.

"It doesn't make it good or bad, it just means we are all individuals and we may not necessarily respond the same way."

And if a person doesn't get side-effects from the vaccine, he says they shouldn't be worried that it's not working.

Blondeau says he suspects people may also be reporting more side-effects than they would with something like the annual flu shot because there's an intense awareness of COVID-19 vaccines.

He says people are watching closely because they know it is important to help the world get back to some semblance of normality.

While some people may feel symptoms for a few days, Blondeau says the risks of COVID-19 far outweigh that inconvenience.

Silliphant agrees and has some advice for those concerned about side-effects.

He says you can find the bright side to a vaccine hangover by thinking about how you dealt with the alcohol-related pain of your college days.

"Make it an excuse to order pizza and hang out on the couch to watch Netflix all day," he says with a laugh.

This report by The Canadian Press was first published April 29, 2021.