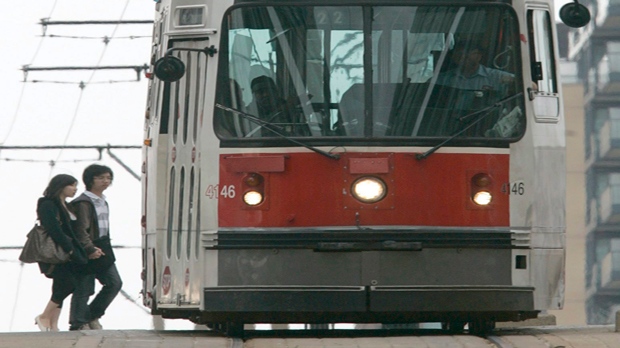 A TTC streetcar picks up passengers in Toronto. (The Canadian Press/J.P. Moczulski)

The Green Party may be lagging in fourth place in the polls but they are ahead of the pack when it comes to their plan for improving transit and reducing congestion in the Greater Toronto Area, according to a new report card from an environmental think-tank.

The Pembina Institute graded the provincial parties on five key elements of their transit platforms and Mike Schreiner and the Green Party came out on top, receiving the best available grade of “On Track” in each and every category.

The Liberals and NDP also fared well, receiving the next best grade of “gathering speed” on three of five categories as well as a grade of “on track” when it comes to making a commitment to establish a dedicated transit fund.

The Pembina Institute, meanwhile, panned the Tories transit plan, giving them the worst possible grade of “stuck in traffic” in three of five categories and the next worst grade of “some forward momentum” in the two other categories.

“One big takeaway is that if you really care about not only building a regional transit plan but fixing traffic quickly there is a big difference in terms of who you vote for,” Pembina Institute Ontario Director Cherise Burda told CP24.com on Tuesday.

The Pembina Institute evaluated the parties on their plan to provide rapid transit for the entire Greater Toronto and Hamilton region, their commitment to establish a dedicated transit fund and to provide immediate funding to build new transit, as well as their proposals to encourage the use of alternate modes of transportation and to fast-track previously announced public transit projects.

While much of the debate around transit in the campaign so far has focussed on big ticket items like the downtown relief line and the Scarborough subway, Burda said the report card tried to look at what parties would to improve transit in the short term as well as the long term.

To that end, the Green Party scored well with their plan to provide municipal transit authorities with an additional $1 billion a year to cover operating costs and another proposal to introduce road tolls as a means to fund transit expansion and cut down on gridlock.

The NDP and Liberals, meanwhile, were both lauded for their plan to create a $29 billion fund for transportation investment over the next 10 years with $15 billion specifically earmarked for transit improvements in the Greater Toronto and Hamilton areas.

The report’s authors also praised the NDP for their plan to provide $250 million in immediate funding to kick start stalled transit projects as well as $60 million annually for the replacement of aging buses.

“We need to put resources into fixing the issue now. People are stuck in traffic, nobody can get around anywhere in the city and fixating on building subways just takes too long,” Burda told CP24.com. “It means we can’t actually fix anything for decades and that is just not acceptable. It also means that we will build a lot less transit and we have a region that is transit starved. We are four decades behind where we should be.”

The Tories have campaigned on a pledge to build subways in Toronto with Leader Tim Hudak previously announcing that his party would forgo a proposed light-rail-transit line along Sheppard Avenue and build an underground line instead.

Hudak has also promised to help build a downtown relief line in Toronto as soon as possible.

In its report, the Pembina Institute takes issue with the short-sightedness of building subways at the expense of other less costly forms of transit, throwing its support behind the Metrolinx Big Move plan, which is supported by the Liberals, the NDP and the Green Party.

“Instead of supporting the Big Move regional rapid transit plan they would only build subways and when you calculate what that translates into they would spend about $16 billion to build only 18 kilometres of subway,” Burda told CP24.com. “If you compare that to just the next wave of the big move, which is 142 kilometres for $15 billion, that’s a real shortcoming. It means we are building little segments of subway for preferred neighbourhoods when everybody is suffering from gridlock.” 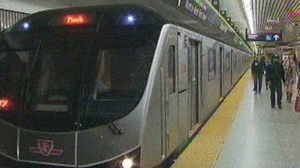 Read the full Pembina Institute report card on the transit platforms of the four major parties. 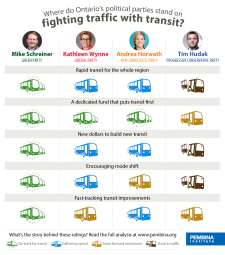