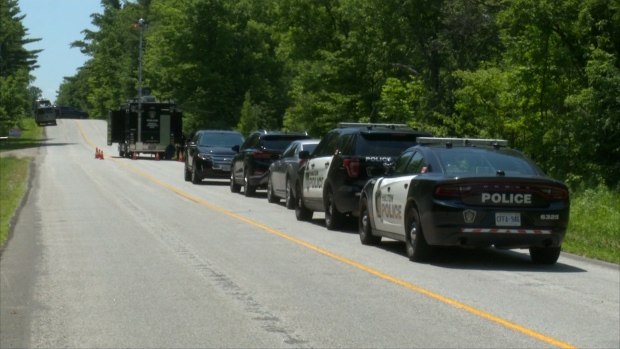 Halton police investigating after a body was found in Milton on June 30.

Halton police have arrested a third suspect in connection with the murder of a 16-year-old Brampton boy in Milton in June.

Police said Ezekiel Agyemang, who was found dead from a gunshot wound near Guelph Line and No. 10 Side Road on June 30, was targeted because he was friends with a man involved in an ongoing dispute with the suspects.

Agyemang, who was a Grade 10 student at St. Thomas Aquinas Secondary School, was kidnapped by the suspects in the Brampton area on June 29. He was taken to multiple locations in the Greater Toronto Area and was “kept against his will until the time of his death,” police said.

The victim and the suspects were acquaintances, police said, but had no real relationship with them.

In a news release on Thursday, police said 20-year-old Stanley Frempong, of Toronto, has been arrested and charged with kidnapping with a firearm.

Police continue to look for a fourth suspect, identified as 24-year-old Ahmed Ismail of Toronto, who is wanted for first-degree murder and kidnapping.

Ismail, who is believed to be armed and dangerous, may be in the Calgary area, police said.

Anyone with information is being asked to contact Halton or Calgary police.