The Scotiabank Arena is gearing up to open its doors for Raptors and Leafs fans alike, and with it, a slew of new concession stands with food that is sure to make your mouth water.

There are 11 new stands setting up shop at the arena this year, some of which are backed by renowned local chefs and restaurants (including one chef who recently earned a Michelin Star).

Here is a rundown of the restaurants making their debut at the arena and some of the food you can chow down on the next time you hit the bleachers here.

Patrick Kriss, the chef behind Aloette and the recently Michelin-minted Alo, will be opening up a stand at the event level of Scotiabank Arena, by section 106.

If you’re looking for an elevated take on a pulled pork sandwich, Aloette has a slow-cooked baby back rib sandwich on the menu. Smothered in a tangy barbecue sauce and topped with dill pickles, pickled onions, and some coleslaw, diners can’t go wrong.

Those in the 300 level can search for some hearty burgers in Section 311. Pit Master Lawrence Pianta is serving up a double stack burger, which comes with two ground smash burger patties, Canadian brisket, and a “secret sauce.” 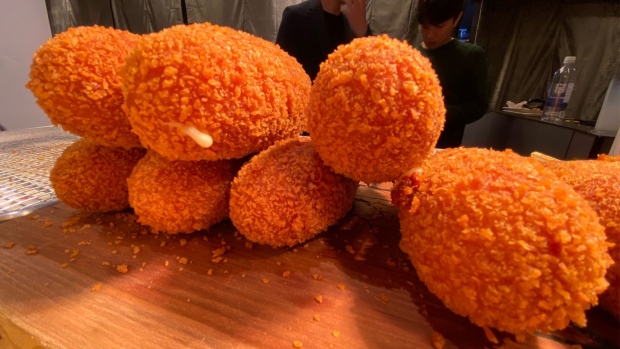 Ditch the plain corndogs for one of these South Korean rice dogs, opening at Section 307. Cheese lovers can opt for a crispy panko-crusted mozzarella stick they say is “perfect for that big cheese pull!”

There is also the Gamsung Potato Dog, which is a fried beef and chicken rice dog topped with crispy golden potatoes.

Can’t decide between sushi or a burrito? EDO Sushi at sections 102 and 105, serves a dish that’s a mix of both with its Big Shrimp Sushi Burrito, a nori-wrapped sushi rice burrito stuffed with sweet-marinated tiger shrimp and drizzled with spicy wasabi mayo.

A MLSE concept stand, diners can grab hearty bowls of food at this concession booth in section 101. There’s the Korean Beef Bowl, which comes with soy-glazed beef, sprouts, seedlings, and kimchi, or the G&G Grain Salad with cherry tomatoes, roasted squash, cucumbers, and pumpkin seeds – both served on top of slow-cooked ancient grains.

Those looking for some comfort food but with an elevated twist can try the New Classic Mac and Cheese at this concession stand in section 103. This staple is packed with three kinds of cheese: Australian Mozzarella, Canadian Cheddar, and Truffle Gouda.

Those who want bao can hit up MLSE’s Noodle & Bay in section 106. One of the baos on their menu comes with karaage-fried chicken thigh, drizzled with spicy sesame dressing and topped with Korean pickled veggies. 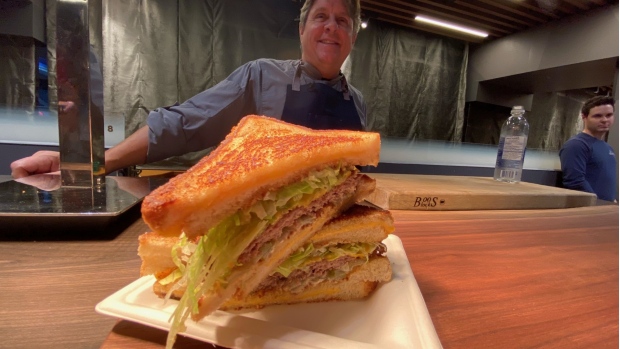 Grilled cheese lovers might want to make their way over to St. Patties in section 121. The Grilled Cheeseburger is fast-food decadence at its finest, as it’s a smashed burger served between two grilled cheese sandwiches as buns. 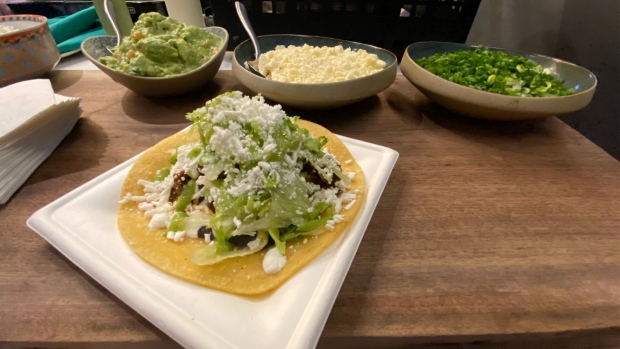 Elia Herrera, the former chef of Los Colibris, is coming to the arena to serve up some tacos. The Adobe Beef Taco is based on a slow-cooked family recipe created in Veracruz, Mexico. 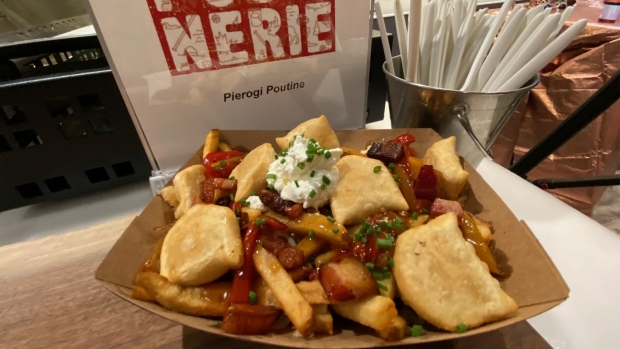 This new MLSE-conceived stand is opening its doors in both the 100 and 300 levels at section 120 and section 320. There are also unique items on The Poutinerie’s menu, like the Pierogi Poutine, which serves your classic poutine but instead comes topped with smoked bacon and mini cheddar pierogis.

Formerly known as Leela’s Roti, Wicked Carib is serving some Caribbean eats in section 110. Vegans can opt for some Jerk Fritters, which are served in a creamy in-house jerk sauce, while meat-lovers can feast on the Jerk Chicken Sandwich.

A taco from Tecolote, one of the new Scotiabank Arena concession stands. (Sean Leathong/CTV News Toronto)

A burger from one of the new Scotiabank Arena stands. (Sean Leathong/CTV News Toronto) 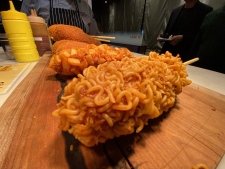 A few of the South Korean rice dogs diners can get at one of Scotiabank Arena's newest concession stands. (Sean Leathong/CTV News Toronto)