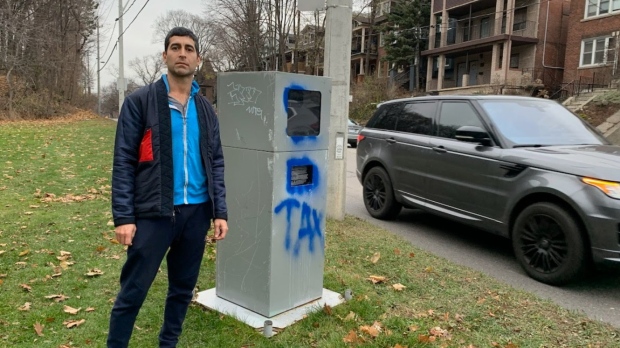 Parkside Drive resident Faraz Gholizadeh stands next to the automated speed enforcement device on Parkside Drive, just south of Algonquin Avenue. For the last six months, the photo radar camera on Parkside Drive has issued the most tickets to speeding drivers in the city. (Supplied photo)

Faraz Gholizadeh is not happy to be living on the street with the highest number of photo radar tickets issued to speeding drivers for six months straight.

Recent data from the City of Toronto shows the automated speed enforcement device on Parkside Drive, just south of Algonquin Avenue, handed out 16,742 tickets in the last six months. That’s 10 per cent of the 164,798 tickets issued by Toronto’s 50 speed cameras during that time for the entire city.

For several years, Gholizadeh and his neighbours along the busy thoroughfare, which borders the eastern boundary of High Park, have been advocating for a safer Parkside. They say that since 2018 three people have died in speed-involved collisions along the street.

“We don’t need to lose any more lives,” Gholizadeh said.

“It’s a lifetime of pain an aguish for the families involved. … The statistics don’t lie. It will absolutely happen again if we keep going down this current path.”

Gholizadeh said the problems on Parkside Drive aren’t hard to fix, pointing to the addition of bike lanes on Bloor Street West that he said have made a big difference in getting drivers to slow down.

“Safety doesn’t have to cost much money,” said Gholizadeh.

Following the most recent fatal crash in October 2021, which killed a well-known couple from Toronto’s Portuguese community, the City of Toronto lowered the speed limit on Parkside Drive from 50 km/h to 40 km/h and stepped up speed enforcement. A new stop light was also installed at the corner of Parkside Drive and Geoffrey Street. A second one is in the process of going up a few blocks south of there.

Last April, the city also placed one of its automated speed enforcement devices at the south end of the busy arterial road.

Parkdale-High Park Coun. Gord Perk says the steps being taken by the city to reduce speeding on Parkside are working, adding the photo radar camera is changing driver behaviour.

“We’ve seen a 70 per cent decline in the number of tickets issued since April (3,586 tickets) and it goes down every month,” he said. “We’re seeing a vast improvement.”

It should be noted that for the month of October the speed radar camera on Parkside was only in operation for a few weeks and issued just over 1,100 speeding tickets. The city initially decided to relocate the device to another site, but changed course and returned it to Parkside Drive late last month.

Perks also said that because the speed radar camera is the only one placed at the same location for several consecutive months, it “makes Parkside look worse.”

“His arguments make no sense. People maybe are adjusting their speed because they’re aware (the camera) is there, but many still speed,” he said. “There’s clearly an issue here.”

Perks said in the end the best option is a complete redesign of Parkside Avenue.

Perks was unable to provide a concrete timeline on when the work would start, he said the goal at this point is to put out a tender in 2023.

“I don’t want to make promises I can’t keep. … The plan has always been short term measures to get some quick changes and rebuilding the street in the long term and that’s what we’re doing,” Perks said.

“The sidewalk on the east side is very narrow and dangerous. We need to widen that sidewalk, which requires significant work to move the drains.”

He said if that work isn’t done right water will pool and flood the road.

Perks also pointed to the “dangerous area” underneath the bridge just north of Lake Shore Boulevard West, which he said needs to be reconfigured.

“If you just paint bike lanes, you will make it more dangerous for cyclists,” he said.

The City of Toronto recently revealed the result of a consultation report for Parkside Drive, which found that 74 per cent of respondents said their number one priority for future improvement are making it easier and more comfortable to walk and cycle. Seventy per cent said improving safety for all road users on Parkside was at the top of their list.

An independent study by Brown+Storey Architects also identified a number of priorities and options for the street. This preliminary findings of this study point to the lack of a pedestrian and cyclist connection between Parkside Drive and the neighbouring High Park.

“Everyone agrees that the street needs to be made safer. We really want our local politician and the city to step up and make those changes now, to start prioritizing our safety” Gholizadeh said.

“Residents want significant measures now, not just band-aid solutions. … Until (the city) starts making those changes, we’re going to keep up our advocacy.”