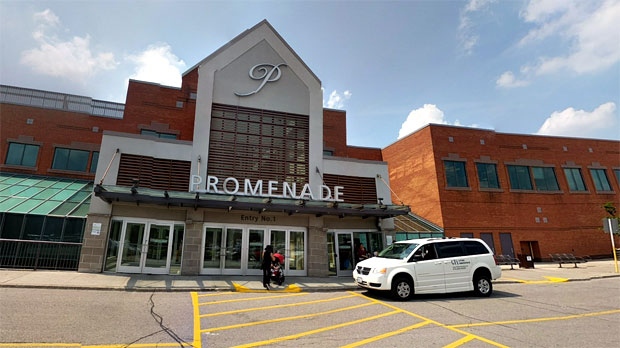 The exterior of Promenade Mall in Thornhill is seen. (Google Maps)

Hundreds of people packed into a cavernous mall space in Thornhill Monday night to express concern over a development group’s pitch for reshaping an ageing shopping centre at the heart of the community into a mixed-use project that would add hundreds of condo units to the site.

Promenade Shopping Centre at Bathurst and Centre streets was sold by Cadillac-Fairview in 2017 to Promenade General Partner Inc., an ownership group formed by the Serruya family and Liberty Development Corporation.

Addressing about 300 people on Monday night, in the space formerly occupied by Sears Canada, Liberty Development Senior Vice-president Michael Uster said the ownership group plans to rework the existing mall and further develop some of the parking space surrounding it.

“We understood when we bought it that the mall was not typical,” Uster said. “It’s more of a community mall.

Uster said despite rumors that have been floating around in the community, there are no plans to demolish the mall completely.

“Let me dispel the rumours. The mall is not going anywhere,” he said.

Instead, he said, the plan is to revitalize and modernize the ageing shopping centre.

Retail architects Len Abelman and David Moore of WZMH Architects have been contracted to come up with the design for the project. The firm’s previous projects include the Shops at Don Mills and new Hudson’s Bay stores at Hillcrest Mall and Yorkdale Shopping Centre.

In a presentation to the community, the two traced the history of the Promenade from its start as a destination shopping centre in the 1980s to its present state.

When it was first built, the then-state-of-the-art mall was surrounded by farmer’s fields and parking lots and had two major anchor tenants – Eaton’s and Sears. Both department stores are now defunct, and the mall is surrounded by detached homes, high rise buildings and a planned rapid bus transit line.

Moore said that the loss of some 200,000 square feet of retail space when Sears Canada shut down has raised questions about the future viability of the mall. He said it’s unlikely that any large retailer could be found to take Sears’ place.

“There are no retailers in the market that can take that Sears space as it is,” Moore said.

However, he did acknowledge that the former Eaton’s space has successfully been replaced with several smaller outlets, such as Old Navy and a T&T Supermarket, and rentals remain strong in the rest of the mall, with 97 per cent of the available retail space leased.

The first phase of the new ownerships group’s plan envisions the conversion of the mall into a mixed use space, consistent with other redevelopments of retail space in North America, Moore said.

That would mean demolishing the space formerly occupied by Sears to make way for two residential condominium towers standing at 35 and 30 stories tall. Those towers would be connected to the mall to give some 1,400-1,500 residents direct access to the retail space.

A hybrid office tower and hotel of 23 stories would be added, south of the current Bathurst entrance.

Four retail pads would also be added to the space between Bathurst Street and the mall’s main entrance. Those pads would house restaurants and shops and be surrounded by pedestrian space, including an outdoor plaza with lighting and fountains that could be used for community events.

The mall’s food court and entrance would be opened up and enlarged to create a kind of great hall, covered by a glass ceiling.

The existing mall has parking for 3,600 cars, but Moore said current standards dictate that around 2,500 – 2,800 spots should be set aside for parking.

The phase one proposal is currently before Vaughan city staff for feedback.

Obtaining proper approvals and permits could take up to two years and construction would take another three years.

In a lengthy question period following the presentation, many local residents expressed concern that the traffic congestion in the area could become unmanageable if more highrise towers are added to the site.

Having already seen intensification over the past decade, roads in the area face regular bottle-necking. Many residents expressed skepticism that more density could be added to the area without worsening the congestion.

Some residents also pushed back against the characterization of their neighbourhood as an urban landscape and said that despite efforts to increase density in the area, transit options remain inconvenient and infrequent and provide a poor alternative to driving.

A transportation impact study has been submitted to the city by a consultant, but there are no details so far about how the possible traffic impact would be managed.

Other concerns include accessibility, noise, shade and infrastructure capacity for the electrical grid and sewer systems.

At Tuesday’s meeting, the architects also shared a vision for further changes to the site, which will be explored as part of the city’s secondary plan process, set to begin in 2019.

They said between 15 and 20 residential high rise towers could be added to the site over the coming decades.

Other ideas that could play out over the next 20 to 30 years include moving the current transit hub to a space inside the mall, erecting a community centre on the space where the bus hub is currently situated, increasing green space, and moving parking completely underground.

While Tuesday’s meeting was hosted by the mall’s ownership group, the city will be holding a separate public meeting in January where city officials will meet with the community about the project.

Presentations from the meeting are also expected to be uploaded to a new website sometime in the next week.

Thornhill residents attend a meeting about the redevelopment of the Promenade Shopping Centre in the space formerly occupied by Sears Canada at the mall Monday December 12, 2018.