York police estimates more than 50,000 protestors marched in a freedom rally in Richmond Hill, Ont. Saturday afternoon in response to the death of an Iranian woman who was arrested for allegedly wearing her hijab improperly.

"We are taking to the streets to protest for our loved ones back home who are living in fear, who are fighting for their basic human rights," one anonymous protestor told CP24.

Iranian-Canadians for Justice and Human Rights, an organization of rights activists and community leaders, organized the march in support of Iranians who are protesting against the country's current regime. The demonstration started at 2 p.m. in the area of Yonge St. and 16th Avenue and concluded with a rally outside the Richmond Hill Central Library.

The ‘Freedom Rally for Iran’ follows the protests that have erupted worldwide over the last week in response to the death of 22-year-old Mahsa Amini, a woman who was detained by the morality police for allegedly wearing her mandatory hijab too loosely.

“As Iran’s regime shuts off the Internet in the country and kills protesters indiscriminately, the people of Iran have repeatedly asked that the international community be their voice and amplify their demands,” a news release reads. “This event is intended to loudly echo their voice.” 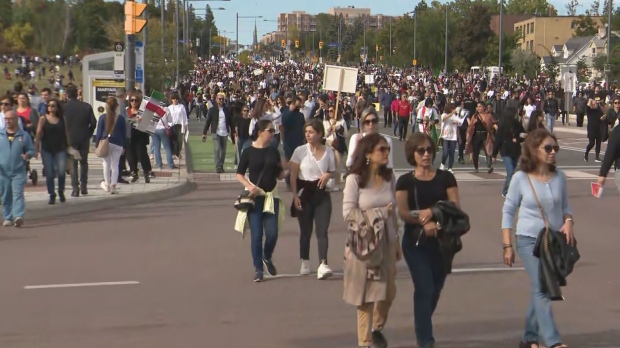 One woman, who was not identified, attended the protest and said the rally is not just to support women but to stand up for everyone who is mistreated in Iran.

"It's not just about women. Men are being tortured, women, children, older people, everything. We've lost everything in that land," she told CP24.

York Regional Police told the public to expect more crowds and traffic delays this afternoon due to the demonstration.

Increased crowds and traffic delays due to a demonstration on Yonge Street between 16th Avenue and the @RichmondHillPL on Major Mackenzie Drive in #RichmondHill.@YRP will have an increased presence to ensure public safety. If possible, avoid the area from 1 to 4 p.m.

Officers said there was an increased police presence to ensure public safety, and advised residents to avoid the area from 1 to 4 p.m.

Roads in the area were closed for the demonstration but have since reopened at around 5 p.m.

Today, Central branch has been chosen by our community as the site for humanitarian protests against recent injustices in Iran. What a historic moment of global magnitude for the Richmond Hill community. #MahsaAmini pic.twitter.com/pDUnMarpRc

Thousands of people are protesting in the 'Freedom Rally' for Iran in Richmond Hill, Ont. Saturday afternoon.