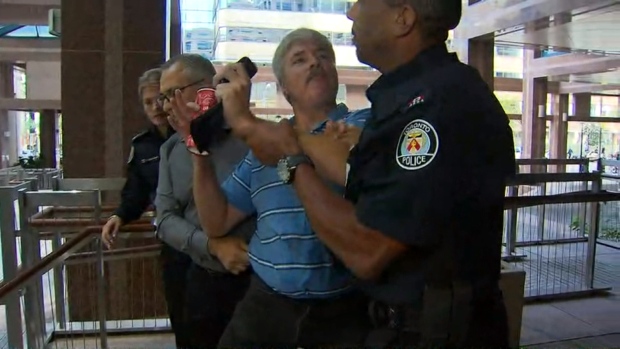 A man is physically removed from TPS HQ after refusing to be screened in this undated image.

TORONTO -- The threat of an attack on police headquarters in Toronto justifies the security screening of everyone entering the building, including people attending police service board meetings, Ontario's top court ruled on Thursday.

The decision overturns an earlier ruling that the searches infringed on the constitutional rights of would-be board attendees.

“In today's world, places like police headquarters in Toronto are attractive targets for terrorists and other criminal extremists,” Justice David Doherty wrote for the court. “The harm caused by those individuals can be catastrophic.”

Chief Mark Saunders brought in a protocol in June 2017 that made almost everyone subject to a search before entering the 12-storey downtown headquarters. Kristian Langenfeld, a regular attendee of service board meetings on the second floor, was denied entry after refusing to submit to the screening.

In response, Langenfeld turned to the courts, arguing Saunders had no right to impose the protocol. He argued the measures interfered with his charter rights of free expression.

Saunders in turn argued the reasonable screening measures - wanding and checking the contents of bags - were for everyone's safety for which he is responsible. He also said Langenfeld could watch board proceedings via livestream or make submissions in writing if he didn't like the searches.

In June last year, Superior Court Justice Jill Copeland agreed with Langenfeld. To exercise his rights, she said, Langenfeld had to sacrifice his personal privacy and security by submitting to a screening process for which there were no probable grounds.

“The effect of the searches is to limit expression by making public access to (board) meetings contingent on submitting to a warrantless search,” Copeland said.

Saunders and the board appealed.

In quashing Copeland's decision, the Court of Appeal did agree with her that the screenings limit free-speech rights.

“The precondition imposed on Mr. Langenfeld's exercise of his right to freedom of expression was not trivial or insubstantial,” the Appeal Court ruled. “It required him to submit to a search of his person and personal belongings as a precondition to exercising his right to express himself by attending the meeting.”

However, the court parted ways with the judge by concluding the measures were nevertheless justified.

Protecting the public and those working at headquarters helps promote the values of a free and democratic society, the appellate court found. Exempting board attendees from screening would not be practical, it said.

“There is nothing in the manner in which the protocol is implemented that could be described as discriminatory, belittling, or aimed at discouraging persons from entering police headquarters for whatever purpose they may have,” the court said. “The security protocol is no more than persons could reasonably expect to encounter when entering a building like police headquarters in a city like Toronto in 2019.”

As a result, the Appeal Court said Saunders had shown the security protocol is a reasonable limit on Langenfeld's right to freedom of expression that is justified in a free and democratic society. It awarded no legal costs.

Langenfeld's lawyer said he was studying the decision with a view to a possible attempt to take the case to the Supreme Court of Canada.