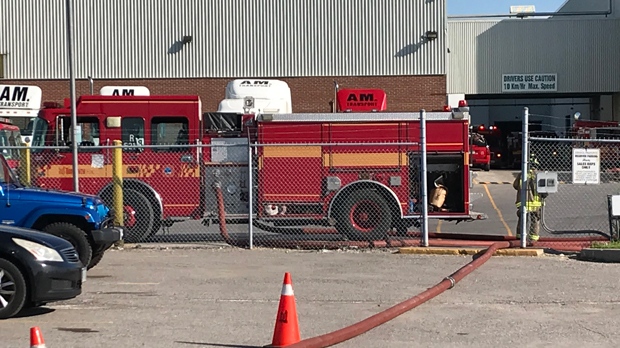 A firefighter stands by a gate at Atlantic Packaging in Scarborough on June 22, 2019. (Ron Hanlin/CTV News Toronto)

Toronto firefighters say they had to cut open the roof of a packaging plant in Scarborough in order to battle a stubborn fire that is hit three alarms.

Emergency crews were called to Atlantic Packaging on Progress Avenue in Scarborough at 5:06 p.m. for a report of a fire.

Callers reported seeing smoke from chimneys and vents on the plant.

Firefighters later cut open part of the building’s roof in order to better douse the flames.

Officials later said the fire required so many firefighters from the surrounding area that they were backfilling nearby fire stations with trucks and crews from other parts of the city.

The fire was knocked down after 10 p.m.