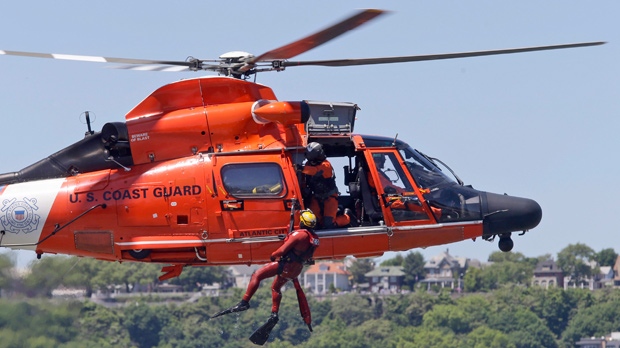 A member of the U.S. Coast Guard is lifted to the H-65 helicopter during a search and rescue operation demonstration, Saturday, May 23, 2015. (AP Photo/Mary Altaffer)

BOSTON -- A Coast Guard rescue helicopter has rescued three Canadian fishermen who had to abandon their boat 150 miles (240 kilometres) off the coast of Massachusetts.

The Coast Guard in Boston says it received an emergency beacon alert from the Yarmouth, Nova Scotia-based vessel at about 12:41 p.m. Monday. The crew of the 54-foot (16.5-meter) Scotia Provider had discovered their engine room was full of water, sent their last known position by satellite phone and abandoned the boat for a life raft.

The Coast Guard sent two Cape Cod-based aircraft and the cutter Escanaba and also alerted several nearby fishing vessels to head to the scene.

The three fishermen were found at around 3 p.m. and taken by the helicopter to Cape Cod.