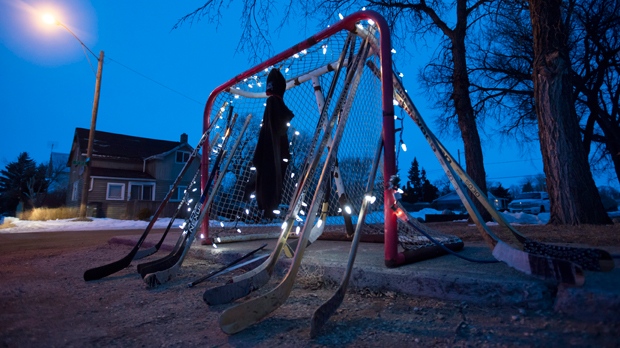 A hockey net lit up with lights and hockey sticks is seen in Kendal, Sask., just outside of Montmartre, the hometown of Humboldt Broncos players Adam Herold on Thursday, April, 12, 2018. Herold along with 15 others were killed in a bus crash last Friday when their team was headed to a game in Nipawin, Saskatchewan. THE CANADIAN PRESS/Jonathan Hayward

HUMBOLDT, Sask. -- Family and friends are to gather today for the funerals of three people who died as a result of the Humboldt Broncos hockey team bus crash.

Forward Jacob Leicht, who was 19, is to be laid to rest in his home city of Humboldt.

The funeral of defenceman Adam Herold, who was 16 and the youngest member of the team, will be held in Montmartre, a village east of Regina.

The service for team bus driver Glen Doerksen, who was 59, is set for Carrot River, Sask.

The bus was headed for a playoff game in Nipawin last Friday when it collided with a semi-trailer at a rural intersection north of Tisdale.

The driver of the truck wasn't hurt.

The cause of the crash is still under investigation.

Services for some of the other victims will be held over the weekend and into next week.

The Broncos players and others who died were from communities across Saskatchewan and Alberta.