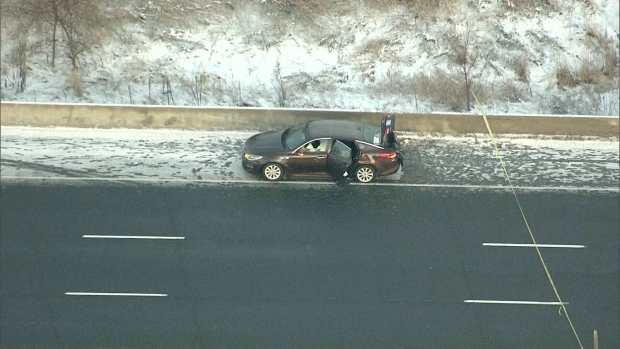 A vehicle is shown with its windows shattered after a shooting on Highway 401 near Whites Road early Friday morning.

Three people were injured after a shooting on Highway 401 in Pickering early Friday morning.

The victims were in a vehicle that was headed westbound near Whites Road at around 3 a.m. when a person or persons opened fire on them from another moving vehicle.

Sources tell CP24 that one of the occupants sustained a gunshot wound to the chest.

Two other occupants also sustained injuries, a woman who was grazed by a bullet and a man who was shot in the arm. Police say that all three victims were taken to hospital. One is currently listed in serious condition while the others were treated and have since been released.

It is believed that there was a fourth occupant in the vehicle, though that person left the scene without talking to officers.

Police say that they are still working to determine precisely where along the highway the shooting began and ended. They say that it is also unclear how many shots were fired.

“All I can say is that the officers and the emergency response team members have walked backed hundreds of metres on the highway looking for any possible evidence and there certainly is evidence being captured and collected,” OPP Sgt. Kerry Schmidt told reporters on Friday morning. “We have our forensic identification members as well as the traffic support doing aerial photography and ground based mapping as well to measure how long the scene actually is.”

While the circumstances leading up to the shooting remain unclear, sources have told CP24 that police are investigating the possibility that it is some way related to an earlier dispute that took place at a bar in the Brock Road and Highway 401 area.

Schmidt would not confirm that detail while speaking with reporters but said that police are aware of the report.

He said that right now officers want to speak with anyone who may have witnessed the shooting or the events that led up to it.

“Obviously there are still a lot of questions that need to be answered as to how this came to take place on the highway and what the other circumstances are,” Schmidt said.

Vehicle was riddled with bullet holes

On Friday morning, the victim’s vehicle could be seen on the side of the highway riddled with bullet holes. Its drivers-side window was also shattered.

Schmidt said that police plan to tow the vehicle to a forensics lab for further testing.

The westbound collector lanes on Highway 401 were closed for several hours for police investigation.

The lanes have since been reopened.

“It takes time to process the scene,” Schmidt said. “We have one opportunity before the scene is compromised and contaminated and we need to be able to do our job.”