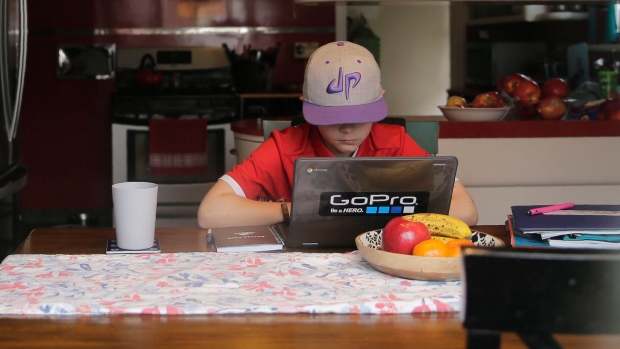 In this Wednesday, April 8, 2020 photo, Colin Powers, 9, streams a math lesson broadcast by public television on a laptop at his home in Union, N.J. Colin's teachers are supplementing their own lesson plans with a new live broadcast called NJTV Learning Live where teachers broadcast live lesson to specific grades at different times of the day. (AP Photo/Seth Wenig)

The top doctor for the Thunder Bay, Ont., area is recommending all schools move classes online for the next two weeks due to rising COVID-19 cases.

Dr. Janet DeMille made the recommendation in a Thursday memo to school boards in the region.

Lakehead Public Schools shared the memo on its website and announced classes would move online starting Monday, with further instruction from the health unit to come.

The school board had called for the move to virtual school this week amid outbreaks that had already forced four schools online.

The board said COVID-19 cases and exposures have led to a staffing shortage and sent hundreds of students into isolation.

“There's actions being taken to reduce that ... at the community level which ultimately will help ensure schools can reopen and stay safe in the province,” Lecce told reporters on Thursday.

He said testing resources will be deployed to school communities

Schools elsewhere in Ontario were dealing with cases of more infectious variants of COVID-19 on Thursday.

As of Thursday, 11 schools in Toronto had detected at least one case of a more contagious COVID-19 variant.

Affected individuals and cohorts have been sent home based on their risk level, according to the local public health unit.

The Toronto District School Board said Earl Grey SPS, Edgewood PS and Pleasant View MS were added to the list on Thursday.

A spokesman for Toronto District School Board said the public health unit has not advised schools to take any additional health and safety measures at this time.

“But at the same time, they're reminding everyone of the importance of the existing health and safety measures,” said Ryan Bird.

“While concerning, we have received assurances from public health officials that there are no additional precautions that need to be taken.”

Variant cases have been found in Toronto's public and Catholic school boards, as well as two private schools.

Lecce pointed to new provincial requirements that students with one COVID-19 symptom must now isolate for 10 days to illustrate the province's stronger public health measures for schools light of the new variants.

“The province has stepped up the requirements, both on the system and on families, just to be absolutely vigilant that we don't see variants of concerns spreading and creating challenges for our kids, for our staff and just for the healthcare system that we're trying to protect,” Lecce told reporters on Thursday.

All five cases have been identified by Public Health Sudbury and Districts as variants of concern.

Provincial data as of 10:30 a.m. on Thursday reported 18 schools closed due to COVID-19 and 430 schools with a reported case, representing nearly nine per cent of schools provincewide.

This report by The Canadian Press was first published Feb. 25, 2021.