‘To be homeless – it’s a difficult feeling’: Residents displaced by high rise fire speak out

A week after a deadly fire tore into a high rise building in North York, displaced residents are being allowed back inside to retrieve some of their things and are speaking out about how they’ve been affected by the fire.

“Emotionally it’s been very very tough. I mean we’ve never been through something like this before. To be homeless – it’s a difficult feeling,” building resident Julia Viana told reporters.

Hundreds of residents were put out of their homes when the five-alarm fire broke out at the complex at 235 Gosford Boulevard on November 15.

One man was later found dead on an eighth-floor balcony. Officials have said that he died of smoke inhalation.

Julia and her twin sister Daniela spoke with reporters Friday at Blacksmith Public School, where their younger brother is a Grade 3 student.

“It has been very, very difficult for him,” Julia said, adding that her little brother doesn’t have the same sense of safety and security as he did at home.

The siblings are currently being housed at York University, but will need to find a longer-term solution within a couple of weeks.

Residents are now being allowed to schedule half-hour appointments where they can go into their units to retrieve important items, such as medicines. During the visits, residents have to wear hard hats and are only allowed to retrieve what they are able to carry, as the elevators in the building are still out of commission. 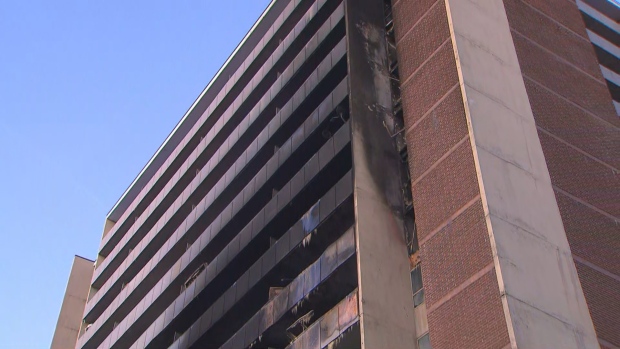 Speaking through tears, the sisters described what it was like to suddenly have to flee their home.

“The things that we take for granted that I really appreciate now, again we have very great support from family and friends that we stay with too,” Daniela said. “It has been very emotional. I remember the first few days we were very tired. I couldn’t sleep because we’d be worried about the next day – school, work.”

The sisters and their family fled the apartment where they’ve lived for ten years when the alarms sounded. They were standing outside the building when bystanders were yelling at the man trapped on his balcony to jump.

“Our little brother was down there. He had to turn around. We didn’t want him to see that,” Julia said. “Not just that, but you had everybody yelling ‘jump jump,’ screaming and yelling, which doesn’t help. 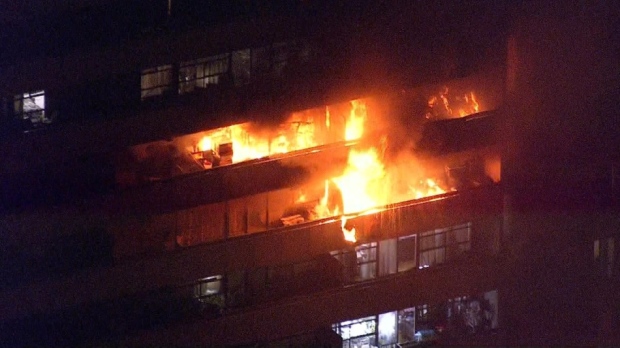 They said that ever since the fire, they’ve been taking things “day-by-day.”

Ontario’s Office of the Fire Marshal spent four days investigating at the scene and traced the fire back to an eighth-floor unit.

“OFM investigators found the fire originated in the bedroom within apartment unit 808, the closest one to the living room,” the OFM said in an email Thursday.

The exact cause of the fire has not yet been determined. Smoke alarm components were located on the balcony of the unit where the fire started, the OFM said.

“This was a difficult scene to process for investigators given the large, intense fire which caused significant fire and smoke spread,” the statement said.

Investigators released the building back to management on Thursday. However a number of units have sustained heavy damage from the fire.

It is not yet clear when residents will be allowed to return to their homes.

Julia Viana (left) and Daniela Viana speak with reporters about what life has been like since a fire at 235 Gosford Boulevard forced their family out of their home. (CP24)