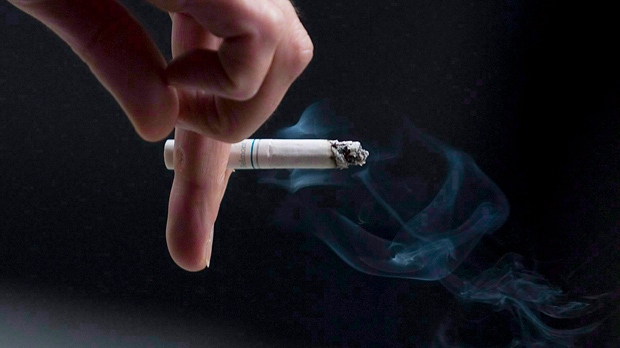 A person smokes a cigarette. (Pawel Dwulit / THE CANADIAN PRESS)

Lawyers for British American Tobacco and R.J. Reynolds Tobacco Company argued they should not be included in the legal action if the Appeal Court lets the case proceed.

They said the lawsuit is based on a false theory that the companies conspired in the 1950s to withhold information from Ontario smokers about the harmful and addictive ingredients in cigarettes.

The companies contend there is no evidence that a conspiracy ever took place or that they specifically targeted Ontario. British American Tobacco notes it did not even exist until 1997.

Ontario launched a lawsuit against 14 tobacco companies in September 2009 in an effort to recoup past and present health-care costs related to smoking.

The province claims the corporations should be on the hook for billions of dollars because they misrepresented the risks of smoking, did not take steps to reduce the effects and marketed cigarettes toward children and teens.

Last January, a lower court ruled the government had jurisdiction and gave the green light to move ahead with its lawsuit.

But the companies warn the ruling could set a dangerous precedent.

"If it is allowed to stand... jurisdiction can be assumed over any defendant, anywhere in the world, regardless of that defendant's lack of connection to the facts alleged or to the jurisdiction, simply by asserting bald and vaguely articulated claims that the defendant engaged in an undefined conspiracy that ultimately resulted in harm in Ontario," lawyers for British American Tobacco wrote in court documents.

"Such an approach cannot be correct and is inconsistent with the principles of certainly, order, fairness, and properly restrained jurisdiction."

Both companies claim the government has also manipulated laws related to smoking to help it with its court action.

"Ontario has unilaterally designed the very legal garb which will determine the locus of the claim and seeks to rely on its statute and pleading as the basis for a real and substantial connection," according to the documents.

"This is wrong in law. Jurisdiction is determined by the court and not by Ontario...The courts have a vital 'gatekeeper' function and cannot permit the legislature to usurp that role and engage in jurisdiction overreach."

It also argued that the province's claims are too vague to proceed.

The Ontario government says smoking is the leading cause of premature deaths and illness in the province and costs the health-care system $1.6 billion a year.

Every province except Nova Scotia has filed similar lawsuits. Foreign parent companies tried to have themselves removed from the lawsuits in British Columbia and New Brunswick, but both courts turned them down and the Supreme Court of Canada denied the companies' requests to appeal.

In the United States, such lawsuits have resulted in huge out-of-court settlements of at least US$206 billion over 25 years.

The hearing is scheduled to continue until Wednesday.