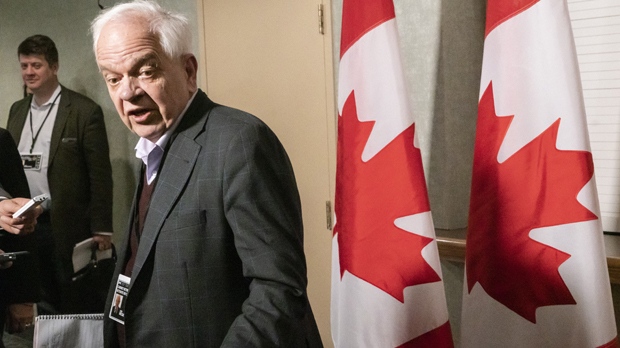 John McCallum was the ambassador to China from March 2017 until January 2019, when the Liberals fired him following a number of public comments that broke with the government's line on the detention of two Canadians in China. He's also a former Liberal MP and cabinet minister.

China and Canada are locked in a battle following the December 2018 arrest of Huawei executive Meng Wanzhou at the request of the United States, which wants her extradited to face fraud charges. China first detained former diplomat Michael Kovrig and businessman Michael Spavor days later. In more recent months, China has stopped imports of Canadian canola and obstructed shipments of pork and beef, attempting to pressure Canada to release Meng.

McCallum lost his post after suggesting Meng had a strong case against extradition to the U.S. because President Donald Trump was using her as a pawn in a trade negotiation with China.

Now a Toronto-based adviser on Canada-China business relations, McCallum recently told the South China Morning Post that he had warned China's foreign ministry that more harmful actions against Canada would only help what he deems the less-China-friendly Conservative party get elected.

Deputy Conservative leader Lisa Raitt and public-security critic Pierre Paul-Hus say in a letter to Canadian Security Intelligence Service director David Vigneault that the comments are “very disturbing” and need to be looked at.

“Canadians expect that the upcoming election will be conducted in a free and fair manner, and that any and all incidents of foreign interference will be fully investigated, with action taken to prevent said interference,” Raitt and Paul-Hus wrote.

“We believe Mr. McCallum's actions, as confirmed by his own public statements, deserve the utmost scrutiny of your agency.”

On Friday Prime Minister Justin Trudeau sidestepped a question about how he felt about McCallum, pointing instead to comments made Thursday by Foreign Affairs Minister Chrystia Freeland that disavowed McCallum as a spokesperson for Canada, without offering up his own thoughts on the matter.

“The foreign minister addressed yesterday the comments by Mr. McCallum,” Trudeau said, before going on about standing up for Canadian interests.

“We will be unflinching about that in our communications both public and private as a government because that is the path to both defending Canada's interests and defending the Canadians that are unjustly held,” he said.

Freeland said Thursday it is “highly inappropriate” for any Canadian to advise any foreign government how it could influence a Canadian election. She said McCallum, who was the immigration minister in Trudeau's government before getting the China post, does not speak for the Canadian government.

Trudeau also did not answer a question about why Canada hasn't yet appointed an ambassador to replace to McCallum in China. The post has been empty for nearly six months, amid one of the most difficult periods for Canada-China relations in memory.

Trudeau called the situation with China “challenging” but would not say whether a new ambassador for China is even in consideration.

“We have excellent diplomatic representation in China who are doing an outstanding job and we are making sure we are moving forward in the right way, in a way that is going to both protect Canadians, uphold the rule of law and keep a path forward for our economy and the investments,” he said. “Getting that balance right is something that we are taking very seriously.”