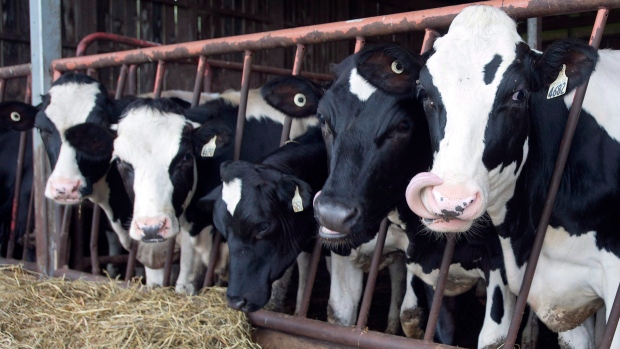 OTTAWA - The Conservative opposition says the government must compensate dairy farmers within 90 days of the new North American trade deal becoming law, saying the sector is the biggest loser in the renegotiated continental trade pact.

The recommendation comes in a letter to Deputy Prime Minister Chrystia Freeland from Conservative MPs, a copy of which was obtained by The Canadian Press.

Dairy was one of the most contentious sectors under discussion during the acrimonious renegotiation of the North American Free Trade Agreement that U.S. President Donald Trump foisted on Canada and Mexico in 2017.

The sector also has major domestic political considerations in all trade negotiations, and Canada and the U.S. are no exceptions.

Trump vilified Canadian farmers for putting American farmers out of work with what he deemed to be unfair practices in Canada. Trump pledged to fight for American farmers, and whether or not he is seen to have delivered will affect his re-election chances, especially in key midwestern states such as Wisconsin.

Quebec and Ontario - Canada's two most vote-rich provinces - are the main homes of the country's dairy farmers.

The Canadian dairy industry has raised concerns about how trade deals were eroding its share of the Canadian market not only during the renegotiation of NAFTA, but in the previous trade talks that led to Canada's comprehensive pact with the European Union.

“The largest group left behind by your government during the CUSMA negotiations is Canada's dairy sector,” says the letter, which cites a 3.6 per cent loss of market share in Canada due to the deal.

That and the elimination of classifications of milk protein concentrates, skim milk powder and infant formula “all combine to make the dairy sector the biggest loser of this deal,” says the letter.

The Conservatives also ask the government to delay implementation of the new deal for the auto industry to January 2021 “to allow them to adjust to the new climate of the deal.”

The impasse around autos was one of the biggest hurdles during the renegotiation of NAFTA because the United States insisted on new rules to increase the North American content automobiles.

The government's own economic impact assessment of the new deal, released this week, predicted that Canadian auto exports to the U.S. would decline by US$1.5 billion, the Conservative letter notes.

But the government's analysis said the deal was better for Canada overall and was better than no trade deal at all.

The Conservatives also raise concerns about the impact of the new deal on the ability of Canadian firms to bid on U.S. infrastructure projects, on digital trade, culture and forestry.

The U.S. and Mexico have formally ratified the new deal, but it is still before Canada's parliament .

Canadian business groups have urged politicians to set aside political differences and the get the new Canada-United States-Mexico Agreement - as it is called in Canada - to passed into law as quickly as possible to end the economic uncertainty that threatens trade and investment.

The Liberals have negotiated separate deals with the NDP and Bloc Quebecois to win their approval for a quick ratification of the deal in the current minority Parliament.

The Conservatives say they support the deal too, but say it is crucial to more closely examine its winners and losers so that the pact remains strong in the future.

The letter also shoots back at past criticism by Freeland that the Conservatives are stalling the ratification of CUSMA.

“This is patently false. In fact, we have offered repeatedly to expedite our study of the legislation to ensure swift ratification, but at every stage your government has chosen to play politics,” the letter says.

“Conservatives have always been clear that we will support CUSMA's swift passage.”

The letter is signed by four Conservative MPs, including trade critic Randy Hoback and the Colin Carrie, the party's critic for Canada-U.S. relations.