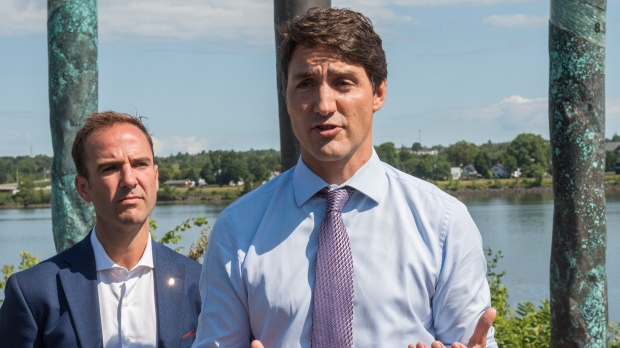 Prime Minister Justin Trudeau, right, speaks with media next to the Watermark sculpture along the St. John River as Member of Parliament for Fredericton Matt DeCourcey looks on. in Fredericton, New Brunswick on Thursday August 15, 2019. THE CANADIAN PRESS/Stephen MacGillivray

OTTAWA -- Justin Trudeau doubled down Thursday on his refusal to apologize for his handling of the SNC-Lavalin affair even as opposition parties tried to ensure a scathing report that found the prime minister broke ethics law remains top of mind when Canadians head to the polls on Oct. 21.

The request came one day after Dion's explosive conclusion that Trudeau violated the Conflict of Interest Act by pressuring his former attorney general, Jody Wilson-Raybould, to halt a criminal prosecution of SNC-Lavalin on fraud charges related to contracts in Libya. Dion found that Trudeau improperly used his position to influence a decision that would benefit the private interests of the Montreal engineering giant.

Two Conservative members of the House of Commons ethics committee wrote to the committee chair, fellow Conservative Bob Zimmer, asking that an emergency meeting be held to consider a motion to invite Dion to give committee members a briefing on his report.

“This is a grave situation. Not only is Mr. Trudeau the first prime minister to have been found guilty of breaking the law, he is a repeat offender.”

Trudeau was found by Dion's predecessor to have violated ethics law by accepting an all-expense paid family vacation in 2016 on the private Bahamian island owned by the Aga Khan, the billionaire spiritual leader of the world's Ismaili Muslims.

Between them, the two opposition parties have enough members on the committee to force an emergency meeting. But the Liberals hold a majority of seats on the committee and - as they've done in the past when opposition MPs have tried to revive committee hearings into the SNC-Lavalin affair -are likely to reject opposition attempts to magnify the impact of Dion's report just weeks before the Oct. 21 election.

That, in turn, will doubtless spark further opposition accusations of a cover up.

Trudeau, meanwhile, repeated Thursday what's sure to be his go-to election campaign message on the SNC-Lavalin affair: he won't apologize for standing up for Canadian jobs.

During an event in Fredericton, Trudeau reiterated that he accepts Dion's report and takes full responsibility for what happened. But he added: “I'm not going to apologize for standing up for Canadian jobs, because that's my job - to make sure Canadians and communities and pensioners and families across the country are supported, and that's what I will always do.”

Pressure is nevertheless mounting on Trudeau to say he's sorry to Wilson-Raybould and former minister Jane Philpott, both of whom quit the cabinet over the affair and were subsequently booted out of the Liberal caucus. Both are now running for re-election as independent candidates.

Wilson-Raybould and Philpott both said Thursday that Trudeau owes Canadians an apology.

“I think the prime minister had yet another opportunity to show leadership in acknowledging that something went seriously wrong,” Wilson-Raybould told The Canadian Press. “It was an opportunity for him to apologize to Canadians for what went wrong, which was very clearly laid out in a report.”

Philpott echoed that sentiment, saying: “I do believe that the people of Canada deserve an apology.”

Trudeau maintains his only interest in the SNC-Lavalin affair was to protect innocent employees, pensioners and suppliers who would be negatively impacted if the company were to be convicted of corrupt practices and thereby banned from receiving federal government contracts for 10 years. He and his senior aides wanted Wilson-Raybould to reconsider her refusal to overturn a decision by the director of public prosecutions to not negotiate a remediation agreement with SNC-Lavalin, which would have allowed it to avoid a criminal trial.

Dion ruled that there was no way to separate the company's private interest from the broader public interest and, therefore, Trudeau should not have had any contact with Wilson-Raybould on the matter.

“I disagree with the ethics commissioner's conclusions, but he is an officer of Parliament doing his job and I fully accept his report, which means I take full responsibility,” Trudeau said again Thursday.

Trudeau is casting the affair as a failure to find the right balance between respecting prosecutorial independence while standing up for the jobs that were at stake. “To make sure this government and no future government gets in this situation again,” he said the government will implement the recommendations of a separate report from former Liberal cabinet minister Anne McLellan on the merits of having the justice minister and the attorney general under the same cabinet portfolio.

That report recommends keeping the two jobs together, but better educating parliamentarians, cabinet ministers and staff members on how best to consult with federal attorneys general.