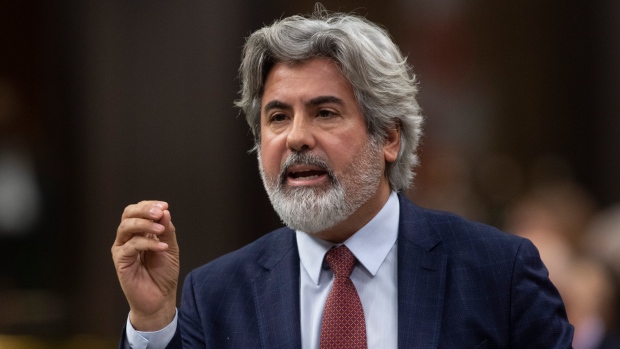 OTTAWA - The Opposition Conservatives are setting Parliament up for another showdown that could trigger a snap election.

The Tories will press ahead Tuesday with a motion that calls for the creation of a special “anticorruption” committee of MPs that would scrutinize specific COVID-19 relief programs the Conservatives have flagged as being carried out unethically.

Liberal House leader Pablo Rodriguez called their move irresponsible and suggested the Liberals may in turn deem the eventual vote on the motion a confidence matter.

“The Conservative motion that is there on the table, if it was to be debated tomorrow, would send a clear message that there is no confidence in the government,” Rodriguez told reporters Monday.

To style the committee as being focused on corruption, and to compel everyone from the prime minister to rank-and-file civil servants to testify, would snarl the work of government at a time when everyone ought to be focused on the COVID-19 pandemic, Rodriguez said.

So the Conservatives' gambit can't be taken lightly, he said.

“They cross the line when they say that the ministers and the public servants will spend all their time working on this instead of working for Canadians,” he said.

“So, you know, when you do things there are consequences.”

Conservative House leader Gerard Deltell called the effort to paint the Tory motion as a matter of confidence “ridiculous.”

“That you are even entertaining such speculation demonstrates to me - as it would to all Canadians - the desperate ends to which the Liberal government will go to further its coverup of a very troubling scandal which reeks of corruption,” Deltell wrote in a letter to Rodriguez Monday, a copy of which was obtained by The Canadian Press.

As political parties negotiated in public and behind the scenes Monday, the Tories had been coy about which of three potential motions they'd move forward with on their previously scheduled “opposition day” Tuesday, when they get to put a matter of their choice on the House of Commons agenda.

The first was the anticorruption committee. Among other things, it would probe a decision to hand a contract to run a student grant program to WE Charity, an organization with long ties to the Liberals, as well as a ventilator purchase agreement given to a firm run by a former Liberal MP.

The second motion was about China's national security law for Hong Kong and the third related to Chinese high-tech company Huawei.

Quebec Conservative MP Pierre-Paul Hus then let slip midday Monday that the anticorruption motion would be the one moving ahead; Conservative Leader Erin O'Toole is expected to lay out his rationale for that decision on Tuesday morning before debate begins.

The NDP had weeks ago proposed the idea of a special committee that would focus exclusively on pandemic-related spending, an idea the Tories' anticorruption probe would amp up.

The Liberals countered with their own proposal for a COVID-19 committee, detailing their pitch Monday in a letter to the House leaders of the other parties.

They're proposing one that focuses on pandemic-related spending, with six Liberal MPs and six members of the opposition parties. The Tories' version would have 15 MPs, with the opposition holding the majority.

The Liberals' approach is too broad, Deltell said.

“All Mr. O'Toole's motion would do is to establish a committee with a focused mandate to review the most troubling reports related to your government's pandemic response measures,” he wrote in his reply to Rodriguez.

“This would allow the 24 standing committees of the House to focus on their usual mandates, and how they intersect with the COVID-19 pandemic, while ensuring Parliament discharges its primary purpose: to hold the government to account.”

NDP ethics critic Charlie Angus said earlier Monday he was concerned the Liberals would just stymie the work of a new committee much as they have done with existing ones, filibustering proceedings to avert votes.

He suggested, however, that to toss the country into an election over it would be folly.

Should the Liberal declare the eventual vote on the motion a confidence matter, how the NDP and Bloc Quebecois vote would be crucial in determining whether the minority Liberal government fell.

“Our message to the Liberals is calm down, we have work to do,” Angus said.

More light was shed Monday on the interaction between WE Charity and the government with the release of dozens of pages of documents previously demanded by the finance committee, including details of fees paid to, and expenses covered for, members of the Trudeau family who participated in WE events.

The charity had previously said Sophie Gregoire Trudeau, the prime minister's wife, had been paid a $1,500 speaking fee for one appearance, and the documents released Monday also disclosed that the charity covered $23,940.76 in expenses for eight appearances between 2012 and 2020.

The Commons' ethics committee has also demanded to know how much money Trudeau, and his family, had received in speakers' fees over the last several years. Trudeau released details of his own Monday - about $1.3 million - a figure and details previously disclosed when he ran for leadership of the party in 2013.

But the Liberals said his family's records were off limits.