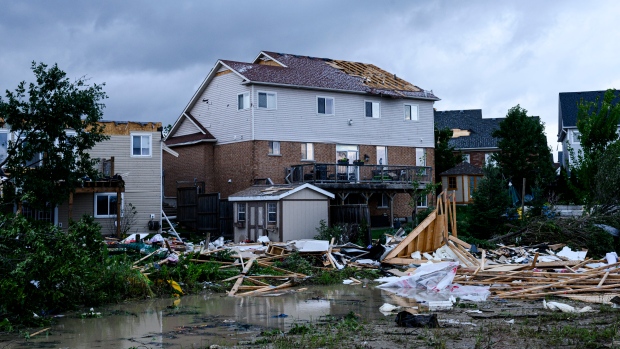 Damage left after a tornado touched down in a neighbourhood of Barrie, Ont., on Thursday, July 15, 2021. THE CANADIAN PRESS/Christopher Katsarov

Environment Canada has said that the damage path of the tornado that hit Barrie was about five kilometres long and up to 100 metres wide, with maximum wind speeds of 210 kilometres per hour.

The Insurance Bureau of Canada says the tornadoes left 71 homes uninhabitable and resulted in more than 2,200 insurance claims for damage to personal and commercial property.

No one was killed after the tornadoes hit but 10 people were taken to hospital in Barrie. The city said more than 100 residents were displaced.

“Canada's insurers are here to help residents recover and rebuild from this loss,” the insurance bureau's Ontario vice-president, Kim Donaldson, said in a statement on Wednesday. “We're beyond thankful that this storm did not lead to any loss of life, which is the most important thing.”

The bureau said damage caused by wind is typically covered by insurance policies and the industry is committed to helping customers affected by the recent tornadoes and any other severe weather event.

Residents affected by the tornadoes or those who have questions about their home, auto or business insurance should contact their insurance representative or Insurance Bureau of Canada's information centre, Donaldson said.

The bureau said all levels of government need to do more to prioritize investments that better protect communities from a changing climate.

The agency said Canada must develop a comprehensive plan to close governance gaps and improve climate defence overall, including enhancements to the current building code to protect against severe wind events.

Earlier this month, Barrie's city council approved a motion to require hurricane straps to be installed in the roofs of new builds.

Coun. Natalie Harris, who put forward the motion, has said having hurricane straps would help prevent roofs from being ripped off buildings during severe weather.

The Barrie councillor has said she was visiting her 15-year-old son at his father's house when the tornado touched down in the city and and blew off the building's roof.

In 1985, a tornado that hit Barrie killed eight people and injured more than a hundred others. Hundreds of homes were destroyed.

This report by The Canadian Press was first published August 18, 2021.