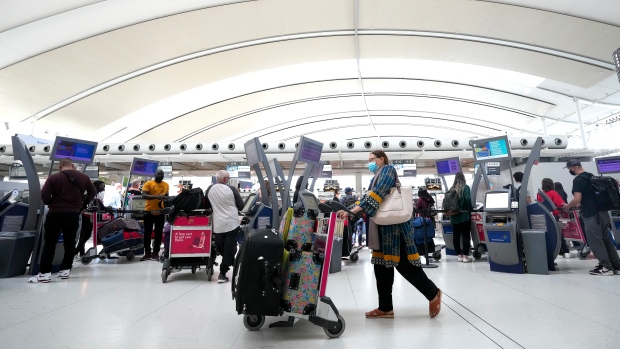 People wait in line to check in at Pearson International Airport in Toronto on Thursday, May 12, 2022. THE CANADIAN PRESS/Nathan Denette

The federal government says that the number of aircraft being held on the tarmac at Toronto Pearson International Airport has "decreased dramatically" since early May.

In a news release issued Wednesday, Transport Canada laid out some of the recent improvements at the country’s airports in metrics such as flight delays, wait times and flight completions.

The update comes as Transport Canada works with the airlines, airports and other stakeholders to try improve the experience for travellers passing through Canada’s airports — an experience that has recently gained a reputation as being amongst the worst in the world.

But according to the government's latest data, there is some reason for optimism.

Wait times were also down for more travellers passing through security screening at Pearson.

Transport Canada said 88 per cent of passengers were screened within 15 minutes by the Canadian Air Transport Security Authority (CATSA) in the first week of August. That compares to an average of 84 per cent at the country’s four largest airports the previous week.

The federal government says it has also hired more than 1,600 CATSA officers across the country since April.

The government has also rolled out an optional Advance CBSA Declaration feature within the ArriveCAN app for travellers arriving at Toronto Pearson, Vancouver or Montréal-Trudeau.

“Early usage data from Toronto Pearson and Vancouver airports indicates that using the optional Advance CBSA Declaration cuts the amount of time a traveller spends at a kiosk by roughly one third,” the government said. “With the thousands of travellers arriving in Vancouver, Toronto and Montreal airports each day, the use of the optional Advance CBSA Declaration has the potential to save hours in wait time.”

The government has come under fire in recent months for lengthy delays at Canada's airports, particularly at Pearson, which is a country's busiest airport and one of the busiest in the world.

The government has attributed the troubles at the country’s airport system to a number of factors, but primarily to the massive and quick increase in passenger volume.

The daily volume of passengers in Canada grew by 248 per cent between January and August this year, according to Transport Canada. That compares to 64 per cent growth at US airports over the same period, though the US still saw a much larger increase in actual numbers; roughly 650,000 more daily passengers compared to around 118,000 in Canada, according to data from the U.S. Transportation Security Administration.