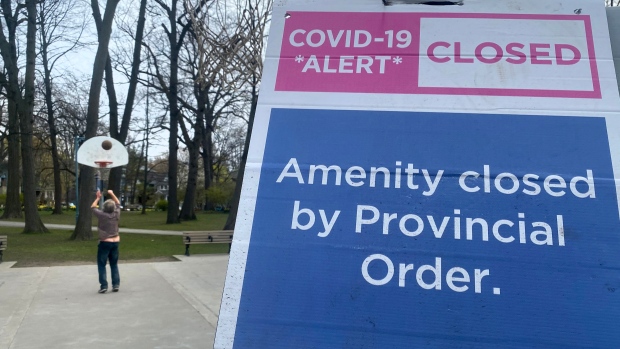 A man shoots baskets alone on an outdoor basketball court in Toronto on Monday, May 3, 2021. THE CANADIAN PRESS/Frank Gunn

The Toronto Board of Health is calling on the provincial government to reverse its decision to close outdoor amenities under the Reopening Ontario Act amid the third wave of the COVID-19 pandemic.

At a meeting on Monday, members of board voted unanimously in favour of a motion to request that the Ford government lift the ban on outdoor recreation facilities, which have been closed for nearly a month.

Speaking to CP24 on Monday, Ward 12 Coun. Josh Matlow called the restrictions on outdoor amenities “absurd” and “counter to the interests of the public.”

Last month, Premier Doug Ford implemented a provincewide lockdown and stay-at-home order in an effort to bring surging COVID-19 cases under control. As part of the restrictions imposed by the province, outdoor amenities, including tennis and basketball courts as well as golf courses, baseball diamonds, and soccer fields, were forced to closed.

“Not only was closing down outdoor amenities and sports not advised by the province's own science table but Dr. Peter Jüni, who leads that, spoke out against it,” Matlow said.

Shortly after the restrictions were implemented, the province’s Science Advisory Table confirmed that it had not recommended that course of action and in a report, the group noted that the province should be “clearly encouraging safe outdoor activities” and “allowing small groups of people from different households to meet outside with masking and two-metre distancing.”

“Policies that discourage safe outdoor activity will not control COVID-19 and will disproportionately harm children and those who do not have access to their own greenspace, especially those living in crowded conditions,” the report warned.

Since that time, many politicians and public health experts have urged the province to change course, including Brampton Mayor Patrick Brown.

The province said last week that it plans to keep these facilities closed until cases decline significantly in an effort to “limit our mobility.”

“What we should be doing rather than restricting outdoor amenities and sports like basketball and golf and tennis and so on, is we should be rather encouraging people to be outdoors,” Matlow said, adding that the risk of transmission is much greater indoors.

“The evidence is there. We have had more than a year to learn about how the virus is most easily transmitted and we know that when people get outdoors where it is well ventilated, the risk is so much lower.”

Toronto’s Medical Officer of Health Dr. Eileen de Villa said discussions on this topic are underway with the province.

“This is a subject that is constantly being discussed by a number of people working in the world of public health, including those of us at Toronto Public Health,” she told reporters at city hall on Monday.

When asked what outdoor amenities should be first to reopen, de Villa said she did not have a “prioritized list.”

“Clearly we are interested in collaborating with our partners across the province, including the province themselves, to see what we can do about increasing the opportunities for people to enjoy the outdoors while the warm weather is here.”

“We know that’s all too brief but we also know that there’s a real opportunity to use the outdoors and use the warm weather... as allies to help us support people in enjoying better physical health, enjoying better mental health and at the same time doing it in a way that reduces the spread of COVID-19.”

"We are trying to look at how we might do that in a safe way. One of the challenges of some of these group activities... is that the group usually comes to the place in a group, congregates as a group, and socializes as a group," Williams said.

"We want to look at how we might put that forward... just because it is a team activity, it tends to indicate a team collective behaviour as we've seen sometimes in the winter time with some of our sports there. The pre-game and post-game activity was certainly conducive to the spreading of COVID-19."