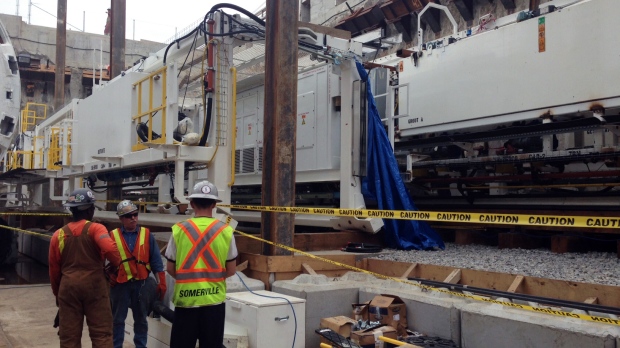 Workers stand next to a tunnel boring machine as it begins carving out an 11 kilometre tunnel for the Crosstown Eglinton LRT, in Toronto, Wednesday, June 5, 2013.

Businesses across Toronto that will be impacted by the construction of the Ontario Line subway are asking Metrolinx for transparency and accountability over the course of the project, following widespread criticism of the transit agency’s handling of the Eglinton Crosstown LRT.

The Ontario Line, which will run from Exhibition Place, along Queen Street in the downtown and north along Pape Avenue to the Ontario Science Centre, is the centre piece of a $28.5 billion transit expansion plan for the Greater Toronto and Hamilton Area announced in 2019.

Construction has already begun, but is set to intensify in the spring, when Queen Street will be closed to traffic from Bay to Victoria streets until 2027.

This will be followed by other partial closures of roadways along the line over the next several years.

John Kiru, Executive Director of the Toronto Association of Business Improvement Areas (TABIA), says that business owners across the city are in favour of transit projects such as the Ontario Line, but they also have concerns about the negative impacts they can bring.

“BIAs, local business people, our organization; we're all in support of transit and our ability to get around. Congestion is a big issue and this is one way of dealing with it by bringing people into the downtown for entertainment, for work and everything else. So nobody here’s on a mission to try to stop the project,” Kiru said.

“But the reality is, if the [Eglinton] Crosstown is any indication, these kinds of projects have an impact on the local community. We understand that the long term impact will be of benefit to the businesses and to the economic and social wellbeing of the community, but the question becomes, will those businesses last long enough to actually benefit from that?”

For many businesses along Eglinton Avenue impacted by Crosstown construction over the last decade, the answer to that question was “no.”

In a statement to CP24, Metrolinx said it understands that construction for projects of this magnitude can be difficult for businesses and residents.

“We are committed to working with each and every business owner to provide support, maintain clear lines of communication and minimize the impacts of construction where possible. This includes supports such as promoting local businesses through shop local campaigns and ensuring store fronts remain visible and easily accessible for customers,” Metrolinx said.

“We have also set up a construction liaison committee, a forum for us to work with residents and business owners throughout the duration of the project to minimize impacts to those in the area.”

Kiru says many lessons can be learned from the large-scale transit projects of the past that can be applied to the Ontario Line project in order to minimize the negative impacts on local businesses.

One of those lessons, he says, is that businesses should be compensated for the impacts that a long-term construction project is likely to have on their bottom lines.

“We truly believe that there should be a comprehensive, built-into-the-cost-of-the-infrastructure-project compensation [package] that should be provided to these businesses and landlords to keep them sustainable,” he said.

“COVID has taught us that we can be creative and we can figure things out, whether it's the federal grants that were provided, loans, or any of the other initiatives that all levels of government created, when the real need is there, we can be creative at helping sustain and keeping in business the businesses that are out there.”

Businesses along Eglinton impacted by Crosstown construction have not received any direct compensation from Metrolinx or the province, Kiru said.

For its part, the city of Toronto recently created a grant program aimed at supporting small businesses impacted by transit construction, however individual businesses are ineligible to receive the funding directly.

The Transit Expansion Construction Mitigation Grant Program, announced on Thursday by Mayor John Tory, will provide grants of up to $50,000 to BIAs and other community organizations to “address the unintended effects that transit construction can have on local businesses.”

The program was launched by the city in partnership with FedDev Ontario and Metrolinx, and will be made available for BIAs, non-profit organizations and “charities demonstrating a strong local business involvement.”

Metrolinx says its contribution is dedicated specifically to supporting BIAs and businesses impacted by Eglinton Crosstown construction, but without direct compensation, the already stretched-thin businesses in the area aren’t likely to see relief any time soon.

When the Ford government first unveiled plans for the Ontario line in 2019, it pegged the cost at $10.9 billion and said that it would be completed by 2027.

Documents released by Infrastructure Ontario in November showed that two contracts totalling $15 billion had already been awarded for the project, which is now expected to be completed in 2031.

Request for Proposals (RFPs) have also been issued for another two contracts that could add another $2 to $4 billion the price tag.

Kiru says the compensation necessary to keep affected businesses afloat during construction would only account for a small percentage of the project’s total cost.

Another lesson, Kiru says, is that more transparency is needed between Metrolinx, contractors and business owners, so that the local community isn’t left in the dark if the project is delayed.

“We can't have crystal balls to see that there’s not going to be something found underground that we weren't expecting that may take a little longer, but [we’d like] some predictability and some sort of a plan that we're a part of,” Kiru said.

“We really just want meaningful interaction and transparent updates about the construction process with the opportunity to submit feedback.”

A subway extension along Queen Street has been proposed in many iterations over the years, but was never realized.

Construction crews tunnelling in the area will have hundreds of years of underground infrastructure to contend with, which could complicate the building process and potentially push back the project’s timeline.

The Ontario Line’s downtown portion also presents a unique challenge for the city above ground, as Queen Street is a popular destination for tourists, visitors and locals, with many businesses reliant on pedestrian traffic.

Alan Liu is the owner of Salad King, a popular Thai restaurant that recently opened a second downtown location at Queen Street West and McCaul Street, in between two of the planned downtown Ontario Line stations at Queen and Spadina Avenue, and Queen and University Avenue.

Liu says it’s too early to tell just how disruptive the construction will be for his business and others in the area, but he’s hopeful that they’ll be able to carry on as usual.

“We're hopeful that because of the construction method used, we'll be able to keep the streets and neighborhood open for business as normal. We're working closely with Metrolinx to hopefully make that happen,” he said.

Liu, who is also an active member of the Queen Street West BIA, says the construction method being used for the Ontario Line is much different than that of the Eglinton Crosstown.

“The key difference is because the Eglinton line was ‘cut and cover,’ so by nature that's already going to be very disruptive. Here on the Ontario Line, there are things we have to pay attention to and there are certain limitations because they have to interact with the existing subway stations,” he said.

“And it is downtown, in a built-up area, but I'm hopeful that if they do things right, we will be able to minimize the disruption…. Now in reality, when construction comes, whether that's going to bear fruit, that that remains to be seen.”

Despite Metrolinx’s assurances that all businesses will remain accessible to pedestrians during construction, Kiru says there are other factors to keep in mind.

“How are deliveries going to be dealt with? Sidewalks might be open, but if you can't get a truck over there to make deliveries, what are the plans for that,” Kiru asked.

“Hopefully we’ll have people on the street, strolling the way they do right now, but there will be closed out areas; how do we assure that it's kept clean, or that the litter bins are picked up?”

Kiru says he’s also hoping that the finalized Ontario Line contracts include penalty clauses, which will incentivise contractors to finish the job on time.

But, he added, if those clauses come with compensation, that money should go straight to the affected businesses rather than to the city.

In a statement to CP24, the city said it would “work closely with Metrolinx to ensure that impacts on businesses are minimized as much as possible.”