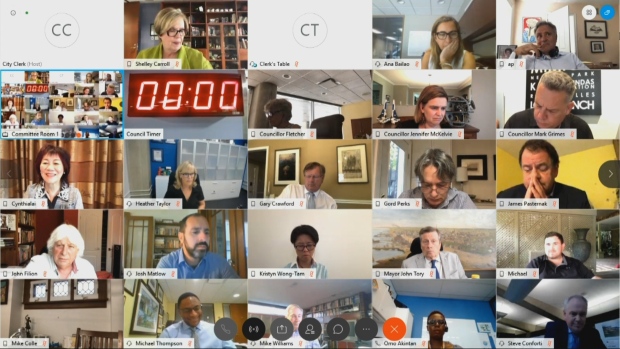 The council voted 22-2 to fight the bill known as Protecting Tenants and Strengthening Community Housing Act, which housing advocates say would weaken tenants’ rights after the pandemic and make it easier to evict them.

In his motion, Councillor Gord Perks stated that the amendments in the act are “contrary to rules of procedural fairness and natural justice.”

The vote comes after councillors reviewed a confidential report from the city solicitor’s office regarding the bill.

Toronto City Council is going to court to legally challenge Premier Ford’s #Bill184. The City Solicitior will try to stop the 6000 pending July 31 #COVIDevictions, and to re-establish tenants’ right to a fair hearing. pic.twitter.com/nU0HEFhCwf

Under current law, the Landlord and Tenant Board hears all disputes over evictions and rent in arrears. The province said the bill would “modernize and streamline” disputes by allowing landlords to draw up private repayment agreements with tenants who are behind on rent.

If a tenant refuses the landlord's offer, they can still take their matter before the board, but some critics and legal analysts have said it may lead to vulnerable tenants to sign shady repayment plans.

Others have noted the bill would allow landlords to evict without a hearing if a tenant fails to fulfil the repayment plan.

The province previously said the changes would keep people in their homes and “at the same time, helping landlords receive payment through a mutual repayment agreement.”

“It's a better approach, especially during these difficult times,” the province said.

The changes would apply retroactively when the province first declared a state of emergency over the COVID-19 pandemic.

Mayor John Tory, who's been facing calls to ban evictions, voted in favour of the motion even though he said it will be an "uphill struggle."

"I'm particularly concerned, and I've said so vocally for quite some time that there shouldn't be a situation in which any tenant is put out of their housing, without a hearing, at the very least."

Concerned tenants protested outside Tory’s home earlier this month and disrupted a groundbreaking ceremony last week, urging the mayor to call on the provincial government to reverse Bill 184.

He reiterated during council meeting that he did not have the power to cause the repeal of the bill or ban evictions in the city.

- with files from CP24 staff and The Canadian Press