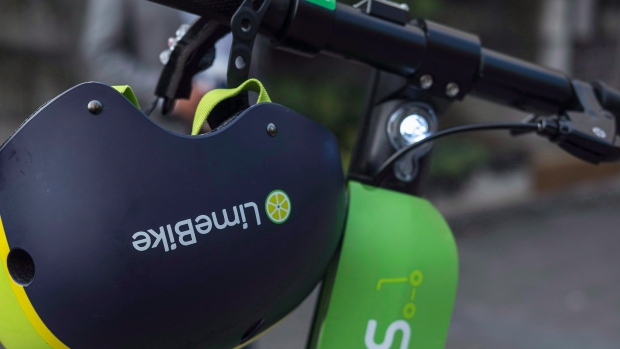 A branded helmet hangs off a motorized scooter during a demonstration of the Lime-S in Toronto on Thursday, Sept. 27, 2018. THE CANADIAN PRESS/Giordano Ciampini

The City of Toronto has decided to opt out of an e-scooter pilot project due to safety and accessibility concerns.

City council’s unanimous decision Wednesday applies to both shared and privately-owned e-scooters and will see Toronto’s existing ban on the use of the vehicles on public streets, bike lanes, sidewalks and other public spaces upheld.

The provincewide, five-year pilot project, which began on Jan. 1 2020, allowed municipalities to approve the use of the vehicles on roadways or on the shoulder of a highway with municipal bylaw amendments in place,

In a report released last month, accessibility advocates had argued the scooters present safety hazards, especially for people living with disabilities and seniors, when encountering them illegally operating on sidewalks.

The Accessibility for Ontarians with Disabilities Act Alliance (AODA) welcomed the decision, adding that “the small number of Ontario cities that started an e-scooter pilot project should now suspend those pilot projects.”

Ottawa and Windsor already have their own scooter systems in place, with wheels hitting the ground in both cities in the last 12 months.

However, council’s decision does appear to go against the view of some residents polled in a recent Nanos survey, which showed that a majority of people in Toronto would support an e-scooter pilot.

The online survey was conducted between April 14 and April 16 and of the 751 residents who responded, about 76 per cent said they would either support or somewhat support the city allowing more environmentally friendly transportation options.

In the absence of the scooter pilot, the city says it will continue to focus on other forms of “micromobility” by continuing to invest in Bike Share Toronto.