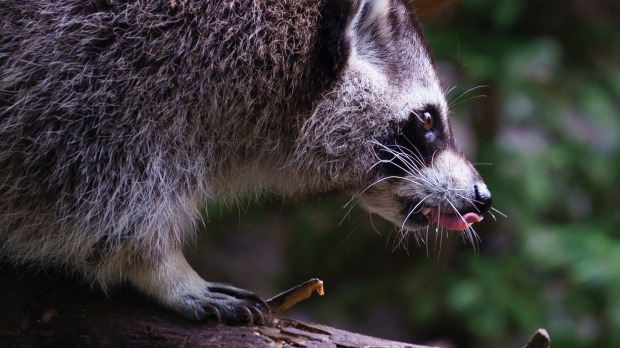 FILE- A raccoon licks his chops in Montreal on Thursday, August 20, 2020. THE CANADIAN PRESS/Paul Chiasson

Toronto says it is “immediately” enlisting more staff to assist with the surge of service requests for picking up dead animals, as the city is facing a raccoon distemper outbreak.

City staff say additional Toronto Animal Services (TAS) workers are being assigned now to help with the overwhelming number of service requests and staff from other city sectors will be recruited in the coming days.

“Beginning next week, the City will also deploy additional staff resources from Solid Waste Management Services and Transportation Services to assist with the pick-up of cadavers. This multi-divisional effort will help with the unprecedented level of cadaver service requests which has now reached more than 900 requests city-wide,” city staff said in a news release on Thursday.

TAS declared a raccoon distemper outbreak earlier this week as it has been dealing with an influx of service requests for dead and sick raccoons exhibiting symptoms associated with the virus in the past several months.

Canine Distemper is a disease that is commonly found in raccoons but can also be contracted by dogs. Raccoons with distemper might act disoriented or lethargic, have seizures, approach people and can become aggressive if cornered.

“The current outbreak is concentrated in Toronto-Danforth and Beaches-East York. Outbreaks usually occur between May and November and will dissipate when colder weather arrives,” city staff wrote. “The City is monitoring this issue closely and has noticed a slight decrease in service requests during the first week of November.”

TAS told CP24 earlier this week that the average response time for picking up cadavers in the city was between 12 to 14 days, compared to the standard 48 hours.

Mayor John Tory thanked city staff for their efforts in tackling the large number of pick-up requests around the city.

“This multi-divisional effort will help address some of the issues we’re seeing now with wildlife and is an important step to make sure we continue to have the clean and liveable city that residents and businesses expect,” Tory wrote.

In a Nov. 8 letter Fletcher penned to the Interim City Manager, she reiterated her request for city staff to “use whatever resources are needed” to collect dead animals within 48 hours of a service request during the distemper outbreak.

We're seeing an unprecedented increase in the number of calls about dead wildlife. I've written to the City Manager asking that all necessary resources be deployed to speed things up.

Fletcher noted that in August there were 54 service calls to 311– the city’s non-emergency line – regarding injured and wildlife cadavers, and then a massive jump to 3,223 calls in September and 3,769 calls in October, according to city data.

Fletcher also noted one senior’s experience who was reportedly informed by Animal Services that a carcass in her area would be picked up within 48 hours, but actually wasn’t collected until much later.

“Then (she was) told 72 hours. Then 10 days and even up to 3 weeks. The carcass is now rotting inside a garbage bin and is now reeking,” Fletcher wrote.

“I hope you agree that this is unacceptable and the pick-up times for this large number of dead animals need to be immediately expedited,” she added.

Raccoon cadavers pose a low risk to humans and animals, but TAS is advising residents to avoid physical contact with raccoons and to vaccinate their pets against distemper and rabies.

Service requests for raccoons and other large dead animals can be submitted online or by calling 311 (the city’s non-emergency line).

“These animals should not be put in the garbage, Blue Bin (recycling) or Green Bin (organics). Small dead animals, such as squirrels, mice, rats and birds can be placed in the garbage if double-bagged (with the bags tied),” the city wrote.

Cadavers can also be brought to any of the three Toronto Animal Services shelters for disposal.