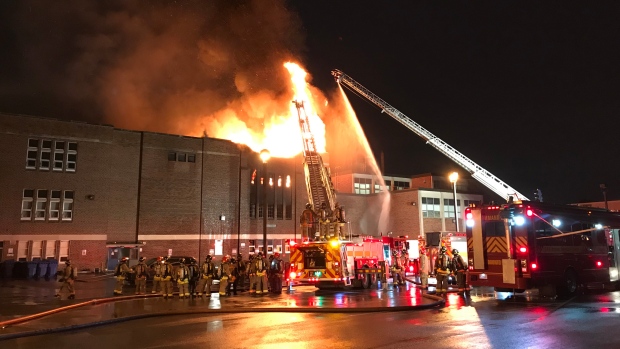 The Toronto District School Board has launched a $90 million lawsuit against the city, the province and the Toronto Police Services Board, alleging that a massive fire that gutted a high school two years ago was the result of negligence.

It was May 7, 2019 — nearly two years ago to the day — when a six-alarm fire tore through York Memorial Collegiate Institute at Eglinton Avenue West and Keele Street.

Firefighters were first called the building shortly after 2 p.m. on May 6 after a fire broke out in the hallway space behind the main stage area of a second-floor auditorium.

The building was evacuated and firefighters attacked the fire inside the auditorium.

But according to the suit, firefighters declared that the blaze had been knocked down before conducting proper overhaul to check that the fire was completely out. Specifically, the suit claims that they declared the fire over before breaking down a wooden wall that they had difficulty getting behind to check for fire.

The fire continued to burn in the floors and walls even as firefighters left the scene and a flare-up was only noticed by a security guard at around 3:15 a.m. the next day, the suit claims.

The suit further alleges that Toronto Fire Services, Toronto police and Ontario’s Office of the Fire Marshal left the building that evening without ensuring that a proper fire watch was in place.

“The decision of the TFS, TPS and OFM to abandon the Building on the evening of May 6, 2019 without ensuring a proper fire watch was in place, was driven primarily by cost concerns of senior personnel, including a desire to reduce overtime costs, and purported lack of adequate resources,” the suit claims.

By 5:30 a.m., heavy smoke and flames were visible at the building and several homes in the area had been evacuated as a precaution.

In addition, the suit claims that TFS and OFM “sought to mislead, misrepresent and suppress evidence of their negligence and gross negligence in respect of the fire.”

An OFM report on the fire was crafted so as to “downplay, mislead, conceal and suppress evidence of negligence and gross negligence on the part of the TFS and OFM,” the statement of claim says.

None of the allegations have been tested in court.

In a statement, the city said it looks forward to “vigorously defending” against the suit and called its claims “unfounded.”

“City staff cooperated fully and professionally in the investigation of the fires at York Memorial Collegiate,” the statement read. “Staff took all appropriate steps to preserve evidence, and allegations in the claim that suggest otherwise are patently untrue and irresponsible.

“It is unconscionable that the TDSB and its insurers would impugn the integrity of Fire Chief Matthew Pegg and other Toronto Fire Services staff in this manner.”

Asked about the suit during a news conference on Toronto’s COVID-19 situation Wednesday, Toronto Fire Chief Matthew Pegg said there is little he can say at the moment.

“It is now in the hands of city legal, as is our process at any point in time for any legal action,” Pegg said, adding that he will “leave it to my colleagues and legal services to manage that appropriately.”

For his part, Mayor John Tory said he has faith in all city departments to do their jobs properly.

“I have confidence in all elements of the system but there are times when even in the same broader public service family there are going to be differences of opinion as to things that took place,” he said. “And that's why we have lawyers and courts and this is off to the courts for their review and disposition and we will watch that process unfold and see what is determined there which I think is the best place for these things to have resolved.”

In a statement, Interim TDSB Director Karen Falconer said the school board was left with “no choice” but to seek damages.

“While the TDSB and our insurers had hoped to resolve this matter outside of court, we were left with no choice but to take legal action,” Falconer said.

Falconer noted that the school will be rebuilt regardless of the outcome of the lawsuit. She added further that the cost of the rebuild is being covered by the TDSB's insurance and that the lawsuit seeks to reimburse them.

She added further that the school board anticipates that any damages won through the lawsuit would be paid by the insurers for the city and the province.

“In the meantime, our focus remains on supporting the 900 students and staff that were sadly displaced by the fire two years ago,” Falconer said. “At the same time, the important cleanup and preparation work that is critical to the rebuilding process is continuing at the site as we look to once again provide generations of students and staff with new high school memories while honouring the past.”

York Memorial C.I. was a designated heritage property and at the time of the fire, the school was getting set to mark its 90th anniversary.

An OFM report released in August said the fire was accidental, but did not pinpoint an exact cause. 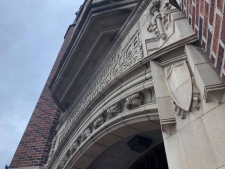