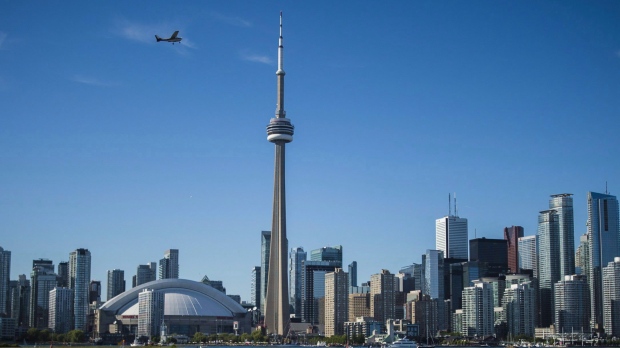 The Toronto skyline is photographed from the Hanlan's Point Ferry as it travels back to the city on Thursday, June 21, 2018. THE CANADIAN PRESS/ Tijana Martin

TORONTO - A new report that ranks North American cities on their ability to attract tech talent has put Toronto at No. 4, giving it the top spot in Canada.

Toronto's ranking was down one spot from last year, as Washington, D.C. - chosen in 2018 to be host of Amazon's second quarters - jumped two spots to No. 2 after the San Francisco Bay Area.

Seattle - home of Amazon's original head quarters - slipped one notch to No. 3 and New York City stayed at No. 5.

Vancouver retained its 12th position in the rankings, Ottawa jumped five spots to No. 14, Montreal dropped three levels to No. 16 and Calgary made its debut in the Top 50 in the 34th slot.

CBRE said Toronto gained 66,900 or 36.5 per cent more tech jobs over the past five years, the second-most after the Bay Area over that time frame.

The report says the average tech worker salary in Toronto rose by 11.2 per cent to reach $84,986, keeping it a much more affordable market for talent than many U.S. cities it studied.

This report by The Canadian Press was first published July 15, 2020