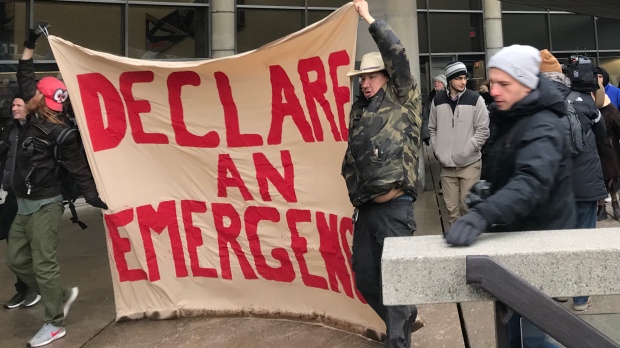 Anti-poverty advocates are seen marching to city hall after a ceremony at the Toronto Homeless Memorial. The memorial now includes the names of 1,000 people who died while homeless. (Janice Golding)

The Toronto Homeless Memorial now includes the names of more than 1,000 people who died while homeless; a grim milestone that some advocates say underscores the extent of Toronto’s poverty crisis.

The Church of the Holy Trinity near the Eaton Centre has been holding a monthly service to add names to the memorial since 2001.

The list includes people who died on the streets, in emergency shelters or from any number of other dangers faced by those who are homeless.

Dozens of names are added each year but on Tuesday a new milestone was reached as 10 more names were added to push the total number of people memorialized over 1,000.

Following the ceremony, those present marched to city hall to present Mayor John Tory with a 25,000 signature petition demanding that he declare a state of emergency on homelessness.

“The vast majority of these deaths were preventable,” street nurse Cathy Crowe said in a press release prior to the ceremony. “I consider the inaction by all three levels of government criminally negligent.”

In a statement provided to CTV News Toronto on Tuesday, Tory's spokesperson Don Pear said that the city has taken “unprecedented action to address homelessness." but needs other level of governments to come to the table and "build on the initiatives the city has taken to date."

He pointed out that approximately 3,000 new shelter beds have been added since 2015, including 2,300 in hotel programs reserved for families. He also said that there will be 899 spaces available in respite sites this winter compared to 805 last winter.

“We have heard from homelessness advocates and appreciate their ongoing efforts to highlight this issue and we encourage them to assist us in making the case for further investment in this area to the other governments,” he said.