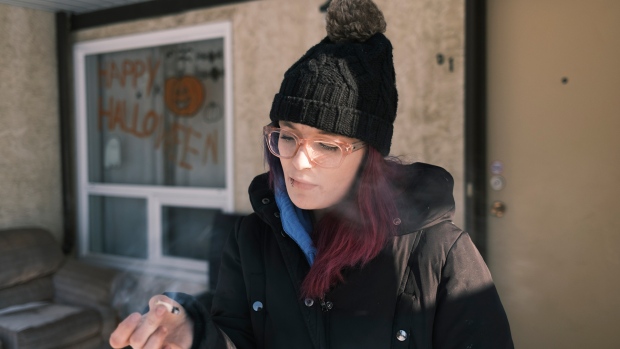 Shelby Curtis smokes a cannabis at her home in Regina on Thursday Nov. 12, 2020. Curtis says she uses marijuana to help her cope with anxiety and depression. THE CANADIAN PRESS/Michael Bell

A study led by Toronto researchers suggests recent cannabis use is associated with a higher risk of heart attack in younger adults, with a stronger association among frequent users.

The research team, which had its paper published Tuesday in the Canadian Medical Association Journal, said that while risk of heart attack among young cannabis users is low overall, their findings suggest those younger than 45 were nearly twice as likely to have had a heart attack than non-users.

Researchers looked at data from a survey conducted by the U.S. Centers for Disease Control and Prevention that included more than 33,000 adults aged 18 to 44, with 17 per cent of them reporting cannabis use in the past 30 days.

Heart attack was reported in 1.3 per cent of cannabis users, compared to 0.8 per cent of non-users.

“We know there are lots of people using cannabis and not everybody is dropping dead from a heart attack,” said Dr. Karim Ladha, a clinical scientist at Unity Health Toronto and one of the study's authors.

“But I think it's something important that health-care providers need to be aware of and counsel patients on. And it's something we need to share with the public so they understand that there is a risk.”

The research team said their findings add to evidence from earlier studies that suggest a link between heavy cannabis use and heart attack.

The current study examined frequent cannabis use - defined as four or more times over the last 30 days - and how it was being consumed in younger adults, who otherwise weren't high risk for heart attack because of their age.

The cross-sectional study found the association between cannabis use and heart attacks was consistent across different forms of consumption, including smoking, vaping and eating edibles.

“Really what we wanted to do was look at a dataset that was generalizable to a larger population,” Ladha said. “We were able to look at the frequency of use and show that how frequently you used it was actually associated with your risk of having a heart attack.”

The study found cannabis users were also more likely to be male, smoke cigarettes, use e-cigarettes and be heavy alcohol drinkers, which may also contribute to their risk of heart attack.

But researchers said their analysis adjusted for those risk factors and others and the results were “still consistent.”

“We feel pretty confident that after (incorporating) all these different statistical techniques, this is indeed a real association that is present,” Ladha said.

While the study sought to uncover the relationship between cannabis use and heart attack, it didn't get into the biological mechanism that could be causing a link.

Ladha said that's still not entirely understood, but previous studies suggested cannabis use increases the heart rate while decreasing the supply of oxygen being delivered to the heart.

“That mismatch between supply and demand of oxygen, that's what fundamentally leads to any kind of myocardial infarction,” Ladha said. “We know that cannabis has the potential to do this, but we didn't really appreciate that even younger adults could be at risk.”

Data from the Centre for Addiction and Mental Health published in January 2021 suggested half of cannabis users increased consumption during the first wave of the COVID-19 pandemic, with those younger than 50 years old using more frequently than older age groups.

Nikhil Mistry, a PhD candidate at the University of Toronto and co-author of the study, said recent legalization and decriminalization of cannabis in Canada and parts of the United States have also contributed to wider use of the drug.

He added that while the popularity of cannabis rises, people need to understand the potential health risks it may carry.

“Its effects on cardiovascular health are not really understood,” Mistry said. “We just wanted to take an approach (with the study) to ... get a better understanding of whether cannabis (has) an effect on heart health in young adults because heart attacks are very rare in that group.”