A man allegedly wielding a large knife and yelling threats made it to the front door of Premier Doug Ford's Toronto home on Monday night, a source says.

According to a spokesperson for the Ford’s office, a man arrived at the suburban home just before 6 p.m. and started yelling threats.

A source close to the investigation told CP24 that once on the Ford property, the suspect, who made it to the front door of the private home, was told to drop the knife several times before he eventually did.

Ford was not home at the time, but his wife arrived just minutes after the incident occurred, the source say.

A photo of the knife involved in the incident has been obtained by CP24. 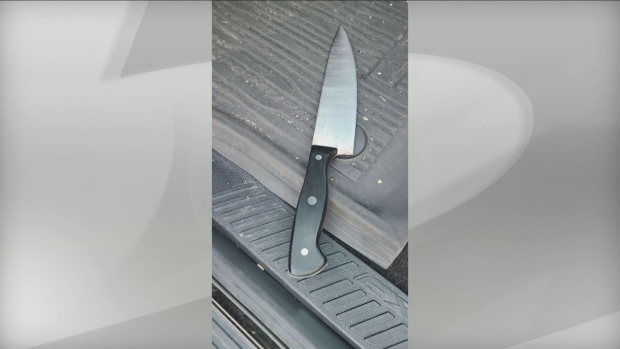 "The premier thanks the officer for his quick action and bravery, which resulted in no harm to anyone involved in the incident," the premier’s office said in a statement Tuesday.

According to police, 44-year-old George Niras of Toronto, was arrested at in connection with the incident.

He is charged with possession of a weapon for a dangerous purpose and 11 counts of mischief to property under $5,000.

"I've been in discussions with the OPP commissioner and in terms of the security out there," Ramer said. "It's an unfortunate incident."

Ford's home has been the site of numerous protests over the last year. In a November 2020 news conference, the premier lashed out at individuals for protesting the province's lockdown measures and disrupting his neighbours, calling them "buffoons."

"I have the best neighbours anyone could ever ask for. They didn't sign up for this, they aren't making decisions for the government, it is totally unfair. It's unacceptable that they have to put up with this because they're living beside the premier," Ford said at the time.

A month earlier, the premier said that a group of protesters were showing up at his home every Saturday morning. Ford said that he had to call the fire department after one particular incident in which a protester "threw blood on the street."

"You want to protest, God bless you, freedom of speech, come down [to Queen’s Park], protest, do whatever you want," Ford said. "Don't scare the kids in the neighbourhood. You are scaring them. You are intimidating them."