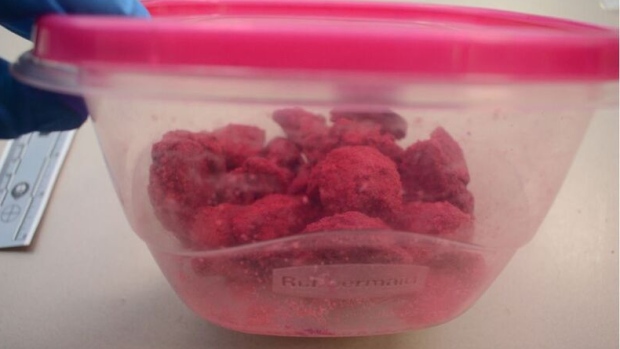 One man has been arrested in connection with a drug trafficking investigation that led to the seizure of firearms and red fentanyl, Toronto police say.

On Wednesday, officers executed a search warrant at a home in the area of Weston Road and Lawrence Avenue West.

During the raid, police say, two Glock model 43XFN Five-sevens were seized along with 170 rounds of Hornady 9mm bullets and 79 rounds of 28mm 5.7 Federal bullets.

According to investigators, officers also seized 786 grams of crystal methamphetamine, 4.71 grams of crack cocaine, 223.15 grams of red fentanyl, and 94.86 grams of heroin.

A suspect, identified by police as 44-year-old William Pokeda, was subsequently arrested.

He faces more than two dozen charges, including four counts of possession for the purpose of trafficking a scheduled 1 substance and two counts of unauthorized possession of a prohibited weapon.

Police have released photos of guns and ammunition seized during the execution of a search warrant at a Toronto home on Dec. 9, 2020.