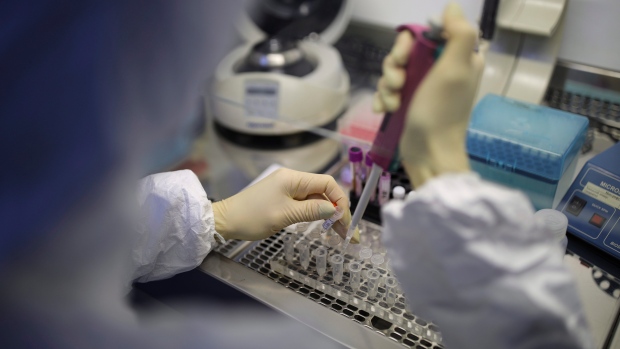 A medical staffer works with test systems for the diagnosis of coronavirus, at the Krasnodar Center for Hygiene and Epidemiology microbiology lab in Krasnodar, Russia, Tuesday, Feb. 4, 2020. Russia has closed its land border with China and suspended most train traffic between the countries. (AP Photo)

Public health officials confirmed one new case of the novel coronavirus in Ontario, involving a Toronto man who recently returned to the province from Switzerland.

The news brings Ontario’s total case count including recoveries to 36, with five people who have made a full recovery from the respiratory illness.

Health officials say a male in his 40s went to St. Joseph’s Health Centre in west Toronto and presented with symptoms consistent with the virus.

He was discharged to his home where he is in self-isolation.

Officials did not specify when he returned to Canada or exactly when he went to hospital.

More than 110 people are currently under investigation in the province for possible COVID-19 infection, a number which now includes virtually everyone who reports to an Ontario hospital with any sort of respiratory infection.

Health officials disclosed a further three cases of the virus yesterday, including an elderly couple who recently returned from Iran and a woman in her 30s who is believed to be a close contact of an earlier confirmed case in Peel Region.

Anyone who tests negative twice in a span of more than 24 hours is considered cleared of the virus.

Canada now has a total of 80 cases of COVID-19 across four provinces, with one fatality.

Ontario has tested a total of 2,747 people for the novel coronavirus so far this year.