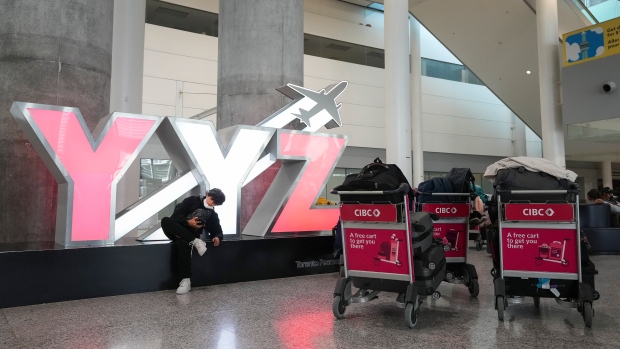 People wait with their luggage at Pearson International Airport in Toronto on Friday, August 5, 2022. THE CANADIAN PRESS/Nathan Denette

Toronto Pearson International Airport is among the five worst largest airports in North America when it comes to overall traveller satisfaction.

According to J.D. Power’s annual customer satisfaction survey, Canada’s busiest airport is ranked 16th out of 20 mega-sized airports, with a score of 755 out of 1,000.

The score is determined by a study of six factors—terminal facilities, airport arrival and departure, baggage claim, security check, baggage check-in, as well as food, beverage and retail space.

“Crowding, long lines, lack of services, which is normal to every airport, but then add tons more people, that becomes a real issue.”

Throughout the summer, customers flying through Toronto Pearson Airport complained of long lines, lost baggage and flight delays. Taylor said that while Pearson isn’t the best airport overall, it really did suffer from a significant passenger volume increase.

“That had the biggest impact.”

However, Taylor argued that most airports struggled with an increase of travellers.

“We saw the peak satisfaction in the airport industry happened at the height of COVID, because there's no one in the terminals. You could park closer. There were no lines. It took like five minutes to get on the aircraft for everybody,” he said. “That's sort of an ideal experience, except for it's a terrible business model for airlines and airports.”

“As people come back and travelling, and the surge has been bigger than anybody ever predicted, satisfaction is dropping, and that's totally expected.”

The study also found that, while passenger volume has risen to about 91 per cent of pre-pandemic levels, overall satisfaction with air travel has decreased.

The study found that overall customer satisfaction with North American airports fell 25 points this year, with about 58 per cent of respondents saying the airport terminals were “severely or moderately crowded.”

Nearly a quarter of travellers said that food and beverages were too expensive, while about 14 per cent said parking cost more than expected.

The Greater Toronto Airports Authority (GTAA), the organization that oversees operations at Toronto Pearson International Airport, has been working to relieve travel headaches for months. In early August, they said the airport had seen “measurable” operational improvements, specifically in security wait times, flight delays and cancellations, as well as baggage delivery.

The J.D. Power 2022 North America Airport Satisfaction Study was conducted between August 2021 and July 2022. Respondents were U.S. or Canadian residents who travelled through at least one airport and covered both departure and arrival experiences, including connections.