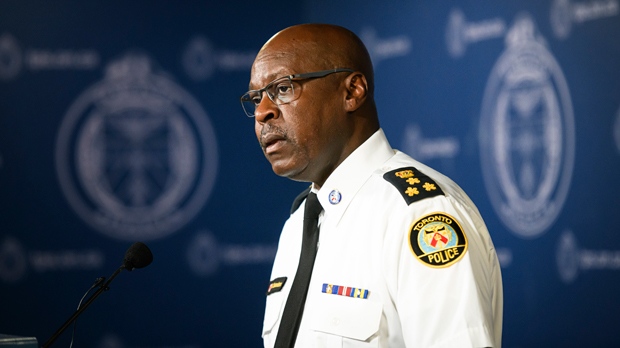 The Toronto Police Service says it is bolstering its Neighbourhood Community Officer program throughout the city as it works to curb a surge in gun violence in some of Toronto’s most vulnerable neighbourhoods.

The aim of the program, which began in 2013, is for officers to build relationships with residents in communities, in the hopes that the relationship can build trust and generate leads to solve crimes.

During a news conference on Thursday, Police Chief Mark Saunders said currently 44 Neighbourhood Community Officers (NCOs) are operating with “enhancements,” which include “community-centric training” and four-year assignments to their respective neighbourhoods.

Saunders said the remaining 83 NCOs will now be adopting those enhancements.

All community officers will have a “standardized mandate” to build partnerships and work towards “long-term solutions to public safety and disorder issues.”

Their uniforms and vehicles will be clearly marked to identify the officers as NCOs.

Officers will also be able to access their work environment through a mobile device, allowing them to spend additional time in their assigned neighbourhoods, the police service said.

“Torontonians want a familiar, trusted police service focused on community safety and reducing crime through collaboration, partnerships, engagement, and empathy. This is the goal of the Neighbourhood Community Officer program,” Saunders said Thursday.

“Neighbourhood officers deliver on this in a few ways. They communicate and they get to know the community in person with individuals as well as groups. This could mean meeting community members for a coffee… attending local schools, getting to know local business owners, and attending community events.”

Humber College has been assessing the results of the program and Humber College Faculty of Community and Social Services Professor Doug Thomson said a report on the will be available in 2020.

"So far, the results we have collected from Toronto communities show neighbourhood residents feel safer in their communities and are less afraid of crime and the threats of gangs,” Thomson said in a written statement.

“The results also show community members see the Neighbourhood Community Officers as important members of their communities, and feel comfortable approaching them."

In recent months, the police service has taken additional steps to help address a spike in gun-related crime, including the launch of a three-month plan to boost its presence in communities across the city.

The additional resources have been put in place following a particularly violent August long weekend where 16 people were shot.