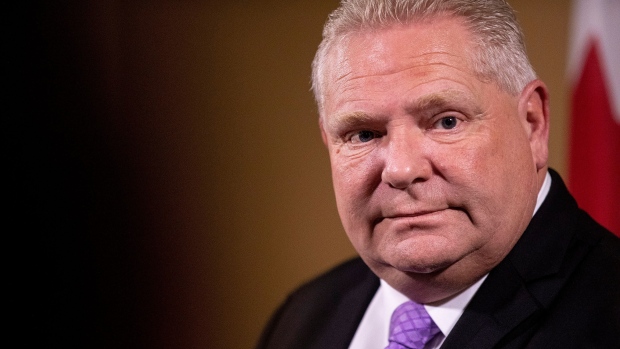 Ontario Premier Doug Ford speaks to the media outside of his office in the Ontario Legislature in Toronto on Thursday November 21, 2019. THE CANADIAN PRESS/Chris Young

Toronto police were called Tuesday to the home of Premier Doug Ford after a suspicious package was delivered to the house.

The premier’s office confirmed that police were called to the premier’s Etobicoke home to investigate the package.

Karla Ford, the premier’s wife, was home at the time and received the item.

“The package arrived in the mail earlier today. The TPS quickly mobilized to assess the situation and cleared the family of any harm,” a statement from Premier Ford’s office read.

No injuries to the family or anyone else were reported.

Toronto police confirmed that they were called to the home. An explosion disposal unit deemed the package not to be a danger, police said.

Ford’s office said a substance in the package “was determined to be a mixture of non-toxic materials.”

Police did not say what was inside the package.

“We want to thank the TPS again for their tremendous work,” Ford’s office said.