Toronto police have launched an investigation after a Liberal candidate's election signs were found vandalized with hate graffiti in Scarborough.

The defaced signs, which belong to Mitzie Hunter, who is running in the Scarborough-Guildwood riding, were discovered in the area of Ellesmere and Markham roads.

Police said they received reports about the signs just after 1 p.m., and members of the forensic team were heading to the scene. 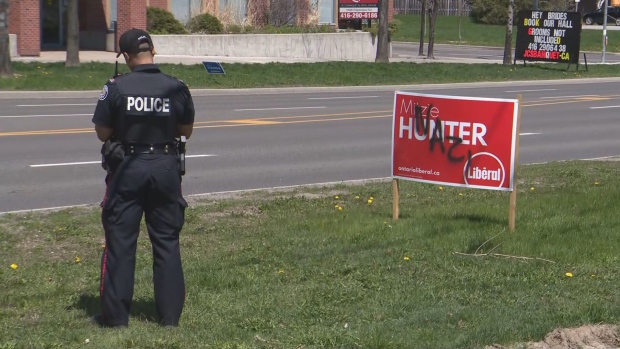 "The message on them was horrific and shocking and is not reflective of our community here in Scarborough Guildwood," Hunter told reporters Sunday.

"I was taken aback by the extreme language that was used with words like Nazi and fascism. And then I actually, you know, really saw what I felt was disgusting that (the word) 'blackface' was painted on one of the signs."

Hunter said she and her team became aware of the signs after a concerned citizen reported it to them. She later saw them on her way to visit a long-term care home to bring flowers to residents for Mother's Day.

"I've been the MPP for nine years. This is my fourth election. And, you know, having a damage done to a sign sometimes happens as people are very passionate about their views, but I have never had my signs defaced in this cowardly and disgusting way," Hunter said. 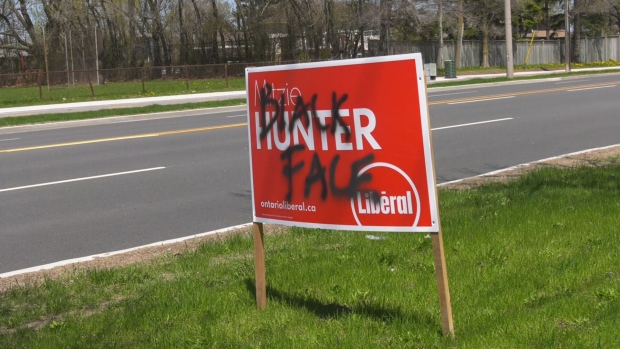 She noted that at least 15 signs were vandalized.

Hunter said she will not let the incident deter her and will continue to campaign with a positive message.

"You will not stop us," Hunter said when asked what her message is to those responsible for the vandalism.

"Your cowardly act done over the cover of night is not reflective of the majority of the people who live in Scarborough and we have a diverse and inclusive community. And we will continue to stay together and build our community up," she added.

Hunter was first elected as the MPP for the riding in 2013.

Police are asking anyone with information about the incident to contact them.