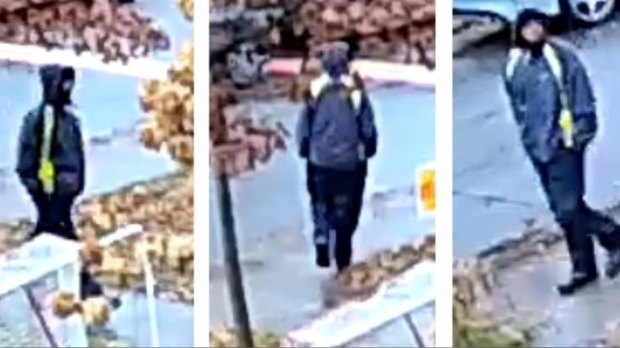 Images taken from a surveillance video show the suspect who allegedly followed a girl to her east-end home. (Toronto Police Service)

Toronto police have released photos of a suspect who allegedly followed a girl to her east-end home earlier this week.

Police said they were called to check an address in the area of Queen Street East and Pape Avenue on Monday.

Officers learned that a 13-year-old girl was walking home shortly before 11:30 a.m. on Sunday when a man started following her to her house.

Police said the girl entered her house and locked the door. The man allegedly walked towards the home, rang the doorbell and banged on the door.

On Tuesday, police released images of the suspect, asking for the public’s help identifying him. He is described as between 30 and 40 years old, six-foot-tall with a medium build.