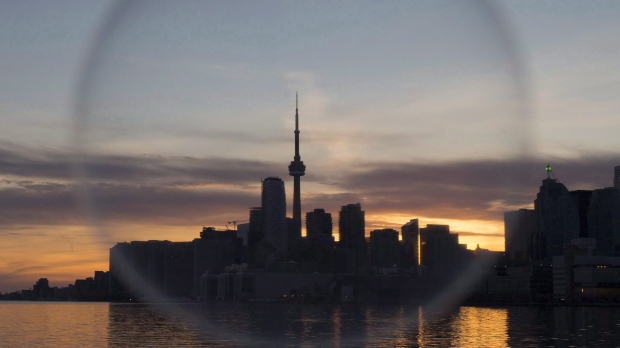 The Toronto skyline is seen through a soap bubble on April 9, 2017. THE CANADIAN PRESS/Frank Gunn

Toronto is one of seven world cities most at risk of a residential real estate bubble, according to a new report released by UBS this week.

Toronto scored 1.96 in the UBS Global Real Estate Bubble Index, the third-highest score below Frankfurt and Munich, which scored 2.26 and 2.35, respectively.

The bank's report scores 25 cities across the world, sorting them into four tiers: bubble risk, overvalued, fair valued, and undervalued with higher scores going to locations with higher risk.

Toronto is in the bubble risk category for the third consecutive year, surpassing Hong Kong, Paris and Amsterdam.

UBS says Vancouver real estate had dropped out of bubble risk territory this year but is still overvalued, with a score of 1.37, down from 1.92 in 2018.

Other overvalued cities in the report were New York, San Francisco and Sydney, Australia with scores less than 1, while Boston, Singapore and Dubai had fair real estate values and Chicago real estate was considered undervalued.

The scores are based on how home prices compare to incomes and rents, and whether mortgage lending and construction spending are excessive compared to the growth in the overall economy.

The scores do not predict whether or when a bubble will “pop” and cause home prices to fall. The existence of a bubble, UBS said, “cannot be proved unless it bursts.”

Demand for single-family homes in the suburbs have pushed Toronto prices up nearly six per cent in four quarters, stretching affordability, the report said.

“Given Toronto's robust population growth and lower mortgage rates, prices there have doubled within only a dozen years,” the report said.

“Moreover, the expected appreciation of the Canadian dollar will curb the appeal of Toronto's property to foreign buyers when travel restrictions are lifted.”

In Vancouver, home valuations remain “sky high,” but have eased amid vacancy fees, a foreign-buyers' tax and less immigration, UBS said. After a 10 per cent drop between 2018 and late 2019, the authors said Vancouver home prices have stabilized thanks to falling mortgage rates and rules that let potential buyers qualify for higher mortgage loans more easily.

Overall, about half of the cities in the report were either bubble risks or “significantly” overvalued. The report's authors said that four quarters of rising real estate prices during a global recession is “unsustainable,” noting that it has been nearly 15 years since prices rose in so many global cities at once.

“It is uncertain to what extent higher unemployment and the gloomy outlook for household incomes will affect home prices â€¦ Rents have been falling already in most cities,” said Mark Haefele, chief investment officer at UBS Global Wealth Management, in a statement.

As the COVID-19 pandemic causes people to “reconsider where to live,” UBS predicts that there will be less demand for housing in cities.

“The rise of the home office calls into question the need to live close to city centers. Pressure on household incomes cause many people to move to more affordable suburban areas,” said UBS real estate chief Claudio Saputelli in the report.

“Already debt-ridden or economically weaker cities will have to respond to this economic crisis with tax increases or public spending cuts, neither of which bode well for property prices.”

UBS also urged first-time home buyers to consider building up wealth with a focus on more liquid assets to diversify their investments outside of their homes.

“The current cities at bubble risk seem to be weathering the coronavirus crisis relatively well. The local economies in Munich, Toronto and Hong Kong will likely recover quickly,” said Matthias Holzhey, lead author of the study.

But, Holzhey added, even if home prices don't plunge, there isn't much more potential for capital gains.

This report by The Canadian Press was first published Oct. 1, 2020.