Toronto’s medical officer of health is warning the public that this year’s flu season is projected to peak just as people gather for the holidays in a few weeks’ time and she is urging everyone to get a flu shot as soon as possible.

“I am urging Torontonians – in the strongest possible terms – to receive their flu vaccine soon as possible,” Dr. Eileen de Villa said in a statement released Wednesday. “Vaccination is the strongest defence against getting the flu virus and appointments are available throughout the city of Toronto, including at any one of the six immunization clinics operated by Toronto Public Health.”

The city said in a release Wednesday that the influenza positivity rate in Toronto has increased from 8.1 per cent last week to 10.5 per cent this week.

A positivity rate above five per cent, the city said, indicates that influenza is circulating in the community and that the influenza season is well underway.

“Historically, influenza activity in a region usually peaks within about five weeks of this positivity rate,” the city said. “This means Toronto will likely enter a peak influenza infection period as people gather for Hanukkah, Christmas, Kwanzaa and New Year celebrations.” 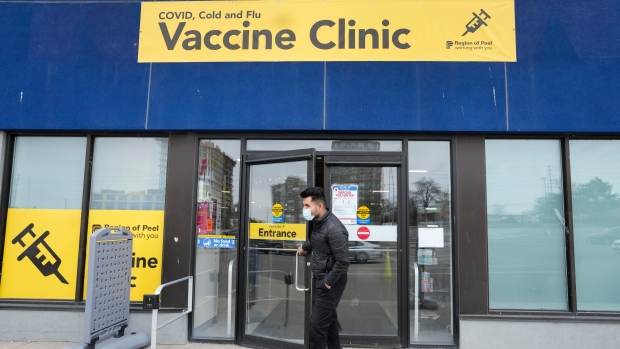 The health-care system has already been overwhelmed with a wave of respiratory illnesses over the past few weeks, mainly from influenza and RSV. Children’s hospitals have been particularly strained amid the rise in infections.

Ontario’s chief medical officer of health recently advised people to mask up in crowded indoor settings and for people to wear masks around young children if they have even mild symptoms of illness.

However the province has stopped short of re-introducing mask mandates.

People can book vaccine appointments online for city-run clinics. Pharmacies around the GTA are also offering flu shots, with some walk-in shots available for those aged 50 and up.

A staff member at a vaccine clinic looks outside the clinic for people waiting to get their COVID-19 vaccine or flu shot during the COVID-19 pandemic, in Mississauga, Ont., on Wednesday, April 13, 2022. THE CANADIAN PRESS/Nathan Denette

Pedestrians walk by a sign in a store window encouraging people to receive a seasonal flu shot in Toronto on Tuesday, October 19, 2021. THE CANADIAN PRESS/Evan Buhler