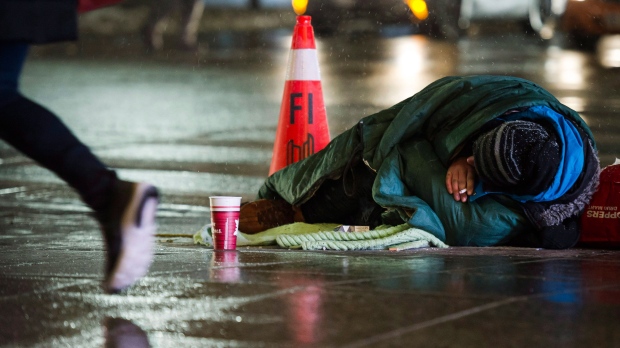 As temperatures in Toronto drop well below freezing, members of the city’s homeless community are sounding the alarm on difficulties securing space at city-run shelters.

While dangerous, the problem is not new, says Sanctuary Toronto outreach worker Lorraine Lam. Even in the best of weather, Lam says finding shelter occupancy in the city is a challenge — one only made harder when temperatures begin to drop.

“Now, with the pandemic, there’s even less space available because of shelter capacities and distancing, so they can't have as many people as they used to have,” Lam told CTV News Toronto on Monday.

Last winter, many members of the homeless community lived in make-shift encampments in city parks including Trinity Bellwoods Park, Alexandra Park and Lamport Stadium. The city deemed these structures unsafe and illegal, citing concerns around fire hazards and COVID-19 transmission, and subsequently spent nearly $2 million dollars to clear the encampments.

Lam works to assist those living in the streets find overnight shelter and, in recent weeks, she says this has become increasingly difficult. On Monday, Lam called the City of Toronto’s central intake line, hoping to secure a shelter bed for a member of the homeless community.

While Lam says she is often made to wait on hold before reaching a city worker, this attempt proved different — Lam says she was met with an automated message saying that central intake couldn’t answer the phone.

The forecast is calling for -18C tonight, feeling like -25C. It has been impossible to get anyone indoors, but today, something new: Central Intake doesn't have the capacity to even pick up the phone.

“I called central intake and, sure enough, it wasn't just that [there were no] beds,” she said. “It was that the system was so overwhelmed, there was no one to answer the phone.”

After over an hour spent waiting on hold, a colleague of Lam’s said they were able to get through only to be told there were no available beds for the night.

Kyrsten Howet, a social worker at a downtown Toronto outreach clinic, also tried her hand at calling central intake in an attempt to secure a bed for a community member overnight.

“[On Monday,] I called for a client and no beds were available,” Howet told CTV News Toronto in a written statement. “He was lucky to be offered a cot at a warming centre that’s only precariously open.”

On Tuesday, Howet tried calling again. After waiting on hold for 75 minutes, Howet says she was told once again that no overnight beds were available. Her client was again advised of temporary space at a Scarborough warming centre.

“[The] people I am working with are increasingly isolated from the pandemic and exhausted from trying to access this broken system,” Howet said.

“These people deserve so much more — it’s heartbreaking what they have to go through to just access a meal and warm, safe place.”

‘THE DANGER IS HIGH’

Michael Eschbach lives in a city-run hotel shelter on Rexdale Boulevard and says cold nights like these can be deadly for those sleeping outdoors.

Eschbach says he recently had to help a friend who was forced to sleep outdoors during a winter night.

“We went out every morning and in the middle of the night to bring them food and coffee and stuff for free,” he said. “Whatever we could from our meager supplies.”

He says it took about a week for the individual to find indoor shelter accommodations.

“I couldn't sleep knowing he was out there,” Eschbach said.

Anthony Toderian, a spokesperson for the City of Toronto, told CTV News Toronto Tuesday that the shelter system is “large, complex and dynamic with a range of different types of services.”

“It is possible a client can call central intake at some point and hear there are no available beds at the time that met their needs at that time of the day/night,” he said. “If this is the case, we ask the client to call back or staff can call them back as capacity is fluid.”

The City admits that, despite the number of beds currently available for single individuals and couples being at a five-year-high, demand for shelter beds is also at an all-time high and that the system remains at or near capacity most nights.

A PLAN FOR WINTER

In October, the city put forth a winter services plan for those experiencing homelessness. The plan laid out a number of steps to support the community, including adding 325 new shelter spaces and 165 spaces at warming centres, alongside working to move people from shelters and encampments into new supportive housing units.

In response to the city, the Shelter and Housing Justice Network (SHJN) presented the City of Toronto with its own winter plan.

While supports such as warming centres are needed to help the homeless community during winter nights, Lam says the city must avoid bandaid solutions to the greater issue.

“It's far from an actual solution. It's really just somewhere for people to go to temporarily warm-up,” she said.

Eschbach echoed these sentiments, underlining that permanent housing is needed.

“[The city] could do that so easily if they really, really wanted to, but I think somehow they consider us a blight,” he said.

In 2021/2022, the City committed to creating 1,248 supportive homes for unhoused individuals and families, including over 300 homes that it claims will be available for phased-in occupancy this winter, as part of its 10-year-housing plan.

However, Eschbach says he has only been made aware of one opportunity for permanent housing during the last nine months spent in a hotel shelter. By the time he heard of the opportunity, it had already been spoken for, he says.

“Somebody needs to be at the helm and put forth a concerted effort at actually building the housing the city keeps talking about,” he said.

Until then, advocates say temporary solutions such as more warming centres, along with removing the barrier of calling central intake and, instead, running all shelters on a walk-in basis could help save lives.

Meanwhile, Lam is urging the city to work more collaboratively with the homeless community and advocates.

“I wish that the city did more to try to work collaboratively with people in the community so that we're actually responding proactively instead of always trying to scramble,” she said.

“What happens when the scrambling happens is that, in the time that it takes for things to come together, people are getting sick, people are freezing to death.”