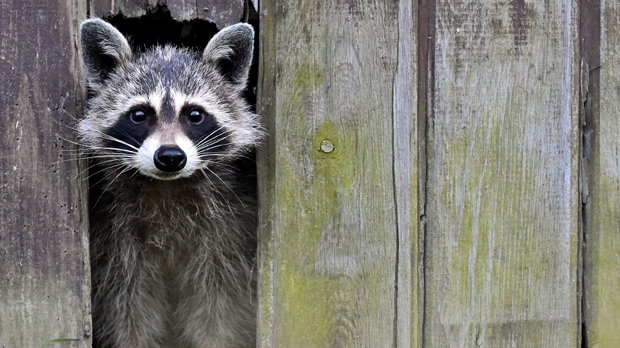 In this picture taken Sunday, May 11, 2014 a raccoon comes out from a hole in a barn in Sieversdorf, eastern Germany. (AP Photo/dpa, Patrick Pleul)

Toronto raccoons will be making their big debut on the small screen in a new episode of the BBC series Planet Earth II.

In the episode, titled ‘Cities,’ film crews visited 12 urban centres around the world, including Toronto, to document animals that dwell among large human populations.

Toronto’s pesky raccoons will be featured along with 11 other creatures, including Peregrine Falcons in New York, Hyenas in Ethiopia and Macaques in India.

While the global spotlight may be a first for the beloved pests, the city’s raccoon population has made headlines locally in recent years.

“We are ready, we are armed and we are motivated to show that we cannot be defeated by these critters," Tory said as he unveiled the new “raccoon-proof” green bins in 2015.

The raccoons were also an enemy of the city’s former mayor and late city councillor Rob Ford, who once said he had stressful nighttime “stand-offs” with the procyonids.

Despite Toronto’s war on “raccoon nation,” some have grown to love their furry neighbours.

In the summer 2015, Torontonians erected a roadside memorial in honour of one unlucky raccoon later dubbed ‘Conrad’ who ended up dead on a sidewalk in the city’s downtown core. The memorial was complete with candles, flowers and condolence cards. It even spawned a social media movement with the hashtag “DeadRaccoonTO.”

Many of the city’s commuters also don’t seem to mind when the animals try to hitch a ride on public transit.

On Groundhog Day this year, a raccoon was spotted on a southbound subway at Spadina Station and in December, another racooon, who was later affectionately named “Rocky,” was spotted riding into the city on a GO train.

It is not clear when the Planet Earth episode will air in Canada but the series premiers on BBC One in the United Kingdom on Sunday, Nov. 6.