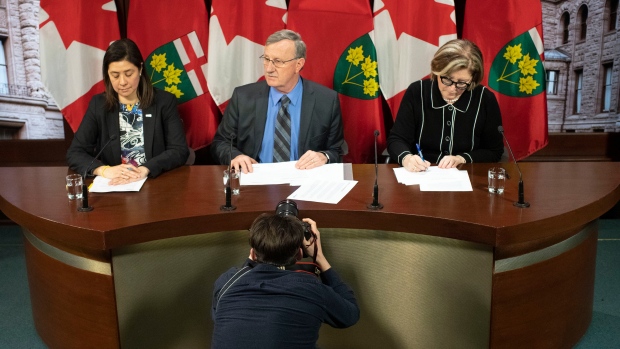 Toronto’s third novel coronavirus patient, a woman in her 20s, is doing “quite well” while in isolation at home, as the provincial lab investigates nine others for possible infection.

Toronto Medical Officer of Health Dr. Eileen de Villa says the woman’s condition had been “improving and resolving for a couple of weeks now,” after she travelled to Wuhan and the Hubei province of China in January, prior to the region being cut off from the outside world on Jan. 23.

De Villa said that when the woman arrived in Toronto on Feb. 21, she was told to call Telehealth Ontario, who after learning of her travel history and symptoms, told her to go straight to North York General Hospital.

“Since arriving in Toronto the individual has had very limited exposure to others,” de Villa said.

She said they are following up with everyone who sat within two seats on the plane with the woman diagnosed with the virus.

Ontario’s three other patients, a Toronto couple in their 50s and a London, Ont. woman in her 20s, have all since fully recovered.

Seven others have been diagnosed with the virus in British Columbia, including a woman who recently travelled to Iran, an emerging area for the global outbreak.

Combined, Iran, South Korea and Italy reported more than 1,000 confirmed cases of the virus in the last 72 hours.

But despite the growing outbreaks in those countries, provincial officials said Monday that the federal guidance on who should be questioned at arrival areas in Canada’s airports has not yet changed to include them.

Up until now, anyone returning from China has been asked to self-monitor and contact a local public health unit if they showed symptoms.

Ontario Chief Medical Officer Dr. David Williams said that decision would be made by the Public Health Agency of Canada and elected officials “later in the week.”

Meanwhile, a second group of Wuhan returnees isolated at CRB Trenton are scheduled to be released on Tuesday.

Williams said none of them have tested positive for the virus.

All tests conducted at NAV Canada facilities, where evacuees from the ill-fated Diamond Princess cruise ship are being housed, also came back negative.

Ontario officials have tested 553 people for the virus so far.