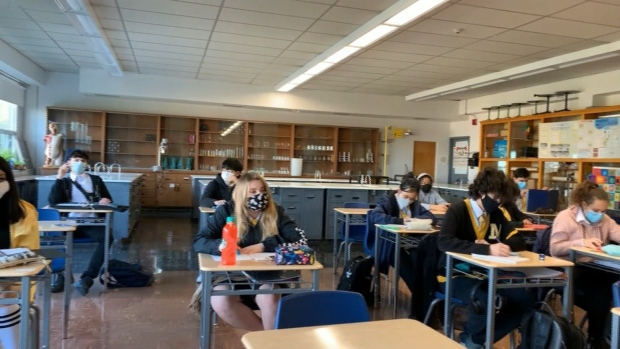 A union representing Toronto’s secondary school teachers is calling for an end to the so-called hybrid learning model, in which an educator is responsible for simultaneously teaching students in class as well as those joining remotely from home.

Ontario Secondary School Teachers’ Federation (OSSTF) members in Toronto are participating in a day-long protest against hybrid learning in advance of a Toronto District School Board meeting later on Thursday afternoon, where the hybrid system will be up for debate.

The protest is unfolding on social media, where teachers are speaking out about their experiences with hybrid learning using the hashtag #nohybrid. Some teachers are also wearing stickers with the message in class.

“I'm sure in some classes there may be only two students at home and in some classes the majority of students may be at home but either way the impact is the same for those students who are at home and the impact is the same for the teacher who essentially has to do twice as much,” OSSTF Toronto President Michelle Teixeira told CP24 on Thursday afternoon. “A lesson has to be tailored to be delivered virtually versus in person so for every hybrid class a teacher is doing double the work.”

Teixeira told CP24 that the board previously indicated that hybrid learning would only be utilized in a small number of classes but she said that statistics shared by the TDSB now suggest that 68.5 per cent of classrooms have educators teaching students both in person and virtually.

The system, Teixeira said, has in turn lead to a situation in which neither group of students is being particularly well served.

“The solution is a dedicated virtual school or virtual hubs where that can't happen. We totally understand the timetable and limitations but for example if you had a series of neighborhood schools where you could find, you know, five kids from this school, five kids from that school who all need to take Grade 10 English and now you have enough of them to create a dedicated virtual class, we believe that's what should be happening,” she said.

The TDSB has previously said that about 86 per cent of its students opted to learn-in person this school year.