Toronto snowstorm cleanup will likely take most of the week, Tory says

Tory said the city is enacting a major snowstorm condition to allow the crews to plow and remove snow more effectively by prohibiting parking on some major routes and giving “friendly tows” to vehicles that may be blocking snow-clearing efforts.

“The snow condition is generally declared for a period of 72 hours, but it can be extended beyond that, and it likely will be extended to some extent beyond that because I think this snow removal work is going to take time,” Tory said. “Staff have been clear to me and to the general manager (of Transportation Services) Barbara Gray that this is the right thing to do and a necessary thing to do in order to make sure that we can clear the city up in a in an effective manner and also make sure that we maintain safety in all circumstances.”

Parking on roads designated as snow routes – primarily roads in the downtown core and all streetcar routes – will be prohibited for as long as the condition lasts. A map of the affected routes can be found on the city’s website. Those who have their vehicles towed will be able to locate them by calling the non-emergency line at Toronto police.

The condition also means the city will actively remove snow to a storage facility instead of leaving it in place to melt naturally after plowing. The removal will likely start later in the week following plowing operations, the city said.

Tory said anyone who doesn’t have to go out should stay home, and those who do need to venture out should try to avoid using their personal vehicles as many cars have gotten stuck and are now blocking major routes.

Heavy snowfall blanketed the GTA this morning, shutting down the Don Valley Parkway and the Gardiner Expressway for several hours and stalling hundreds of city buses in the snow.

Environment Canada issued a blizzard warning for the GTA early Monday amid one of the biggest winter storms the region has seen in many years. The national weather agency later downgraded the weather event to a winter storm warning, which eventually was dropped altogether shortly before 6 p.m.

During the peak this morning, about eight to 10 centimetres of snow fell each hour. Wind gusts of up to 60 kilometres an hour are still causing blowing snow across the region.

The significant snowfall prompted schools across the Greater Toronto Area to delay the start of in-person learning. Students in Ontario were supposed to return to the classroom today for the first time in a month but many school boards, including the Toronto District School Board and the Toronto Catholic District School Board, closed schools this morning due to the inclement weather and continued with remote learning.

TDSB spokesperson Ryan Bird acknowledged that the decision to offer remote learning today was "short notice" for many teachers and staff, who he said have been asked to try their best to offer live virtual classes or at the very least, asynchronous learning.

"Knowing that there will be an increased number of student absences in the weeks ahead due to Omicron... We decided that we wanted to maximize learning to the greatest extent possible," Bird told CP24.

"We thought it was best to get as many learning days in as possible knowing what's to come."

Looking ahead to Tuesday, the TDSB has decided there will be no virtual or in-person learning on Jan. 18.

Officials cited safety concerns due to poor road conditions, snow drifts, plowing and the high possibility that buses will be delayed.

"With all of this in mind, we have made the decision to close all schools to in-person learning for Tuesday, January 18. Students will not participate in live remote or virtual learning," officials said in an email to parents.

Some child-care programs may remain open, however families are being asked to contact the facilities directly to confirm they will be operating.

The Dufferin-Peel Catholic District School Board said Monday night that all their students will learn remotely again on Tuesday because of the snowfall. Most other boards have not yet made a decision about Tuesday.

Some post-secondary institutions, including Ryerson, the University of Toronto’s Mississauga campus, and Sheridan College, have cancelled all in-person classes today.

Toronto police temporarily closed the Gardiner and DVP at around 10 a.m. due to dangerous road conditions. Both have since reopened but officials say traffic is moving slowly.

"If you become stranded in a vehicle do not leave. The vehicle offers a form of protection from the cold. A single person walking through the snow is harder to find than a stranded car or truck," the weather agency said in its advisory.

"If you do travel and become lost, remain where you are until the blizzard has passed. Protect yourself from wind, cold and disorientation by staying sheltered, indoors or with your vehicle."

Toronto police said officers were authorized Monday to transport people to hospital where appropriate or required because so many vehicles were having trouble getting around.

Ontario Provincial Police said they saw "numerous" collisions throughout the day and many vehicles getting stranded on the roads due to the snow.

“It has been a very long, arduous day,” OPP Sgt. Kerry Schmidt said. “We've got so many vehicles getting stuck.”

He said it was “beyond frustrating” that there were so many people on the roads and reiterated that police are asking people not to go out unless absolutely necessary.

“There is far too much traffic out there,” Schmidt said. “We tell people not to go out unless absolutely necessary, and I would hazard to say that not every one of the drivers out there is on an emergency run.”

Earlier in the day he said the 401 was basically at a standstill and that "anyone who thought they were going somewhere this morning are likely going to be late, never make it and they are probably regretting venturing out in the first place."

A pileup involving a tractor-trailer on the Gardiner Expressway near Park Lawn Road blocked all eastbound lanes earlier this morning before the highway was completely shut down.

"It has been an intense morning," CP24 meteorologist Bill Coulter said earlier Monday.

Speaking to Newstalk 1010 on Monday morning, Premier Doug Ford, who resides in Etobicoke, called the situation on Toronto roads "an absolute disaster."

"I'm just in my four-by-four pickup, trying to help people out. I just picked some gentleman up, dropped him off at home but I just encourage everyone to stay at home. We have buses sideways up on Dixon Road," Ford said.

"If you can give someone a lift, they are stuck in their car, pull over... give them a lift somewhere and get them home safely."

In an interview with CP24, Ford said he is driving around his neighbourhood trying to make sure people aren't stranded in their cars.

"I've dropped off a few people at their homes. You just do what you have to do. Everyone is doing it. I'm no different. Premier or no premier, you are there to help your neighbours right now," he said.

The hazardous conditions on the roads are creating many problems for GTA transit agencies today, including GO Transit.

In a social media post, Metrolinx spokesperson Anne Marie Aikins said that the storm “was extremely challenging for staff and transit customers” Monday and that the ffects would continue into Tuesday.

Multiple GO bus routes were temporarily suspended or adjusted Monday and Aikins said service will also be reduced on GO trains and buses as well as the UP Express on Tuesday.

“Buses & trains are not in their usual places given the disruptions. Infrastructure & stations also require significant clean up & inspection,” Aikins said.

She urged people to check schedules online before leaving home.

TTC service has also been significantly impacted by the conditions, including on the city's busiest surface route. Shuttle buses operated along the 504 King streetcar route between Bathurst and Dufferin streets for hours on Monday morning.

The Scarborough RT was completely shut down Monday evening and major problems were reported on both lines 1 and 2. The TTC also said that more than 500 of its buses got stuck in the snow Monday.

"We are all dealing with this in real time. Safety is always our top concern at the TTC," spokesperson Stuart Green told CP24.

"The best thing that I can advise people is to leave some extra time, pack some patience, and stay home if you can. We will get you where you need to go safely but it is going to take longer today."

While plows and salt trucks have been out trying to clear roads since early Monday morning, the city is urging residents to stay home.

"We will get to sidewalks as well so we are doing all of that but it is going to take time. There is a lot of snow that has fallen and continues to fall. We do ask for people's patience and that is why we are asking people to stay off the roads as much as they can. That will allow our crews to get those roads cleared as quickly as possible."

The weather conditions have also prompted a number of other closures and cancellations around the GTA, including in the regions of Peel and York, where COVID-19 vaccination appointments scheduled for today have been cancelled. City-operated vaccination clinics are also closed today in Toronto.

Waste pickup has been cancelled today in various parts of the GTA and Toronto Public Library branches are now closed.

While the heavy snowfall ended this afternoon, blowing snow is continuing to cause poor visibility on the roads in some areas.

Dozens of flights in and out of Toronto’s Pearson International Airport were also cancelled Monday and the airport urged travelers to check their flight status before heading to the airport.

Tonight the snow is expected to be replaced by frigid temperatures, including wind chill values hovering around -20.

An extreme cold weather alert has been activated by Toronto’s medical officer of health today and multiple warming centres, which were already open as a result of a previous alert, will remain open until further notice.

Environment Canada Senior Climatologist Dave Phillips said Monday afternoon that today's snowfall could be one "for the record books."

"The amount of snow, this over three days, hey this would be a major storm but to think that this is over about 12 hours is quite remarkable," Phillips said Monday afternoon.

"Toronto is like a snow globe. I mean it is snow above you, below you, around you."

He noted that so far this winter, Toronto has only seen a total of about 50 centimetres of snowfall.

"We really could possibly get close to what we have had in the last 80 days in less than a day," Phillips said.

"We are the snowiest country in the world and I think Toronto is proving it today."

A person walks across a street in downtown Toronto as a heavy snowfall affects the greater Toronto area on Monday January 17, 2022. THE CANADIAN PRESS/Chris Young 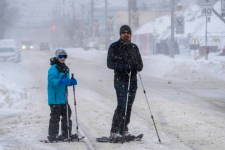 Snowshoers pause on a major road artery during a severe winter storm in Toronto on Monday January 17, 2022. THE CANADIAN PRESS/Frank Gunn

Premier Doug Ford is shown helping out a stranded motorist in Etobicoke on Monday in this photo provided by his office. (Office of the Premier)

A TTC bus that became stuck in the snow along Queen Street East on Monday morning is shown.

People walk through the snow during a winter storm in Toronto on Monday, Jan. 17, 2022.

Buses try to navigate snow-filled streets in the city during a winter storm on Monday, Jan. 17, 2021.