Toronto Syrian restaurant that closed due to threats reopens 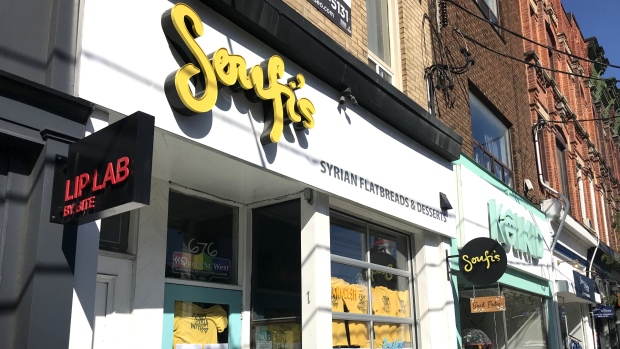 TORONTO -- A popular Syrian restaurant in downtown Toronto has reopened, just days after its owners said a flood of hate messages had forced them to close.

Members of the Alsoufi family say an outpouring of support from people across the country convinced them to reconsider their decision to shut down Soufi's.

That support was on display as the restaurant reopened this morning, although members of the media outnumbered patrons ahead of the lunch hour.

Hand-written notes of encouragement were posted on the front door, while supportive emails were printed out and plastered on a wall inside.

Meanwhile, Toronto police continue to investigate a complaint from the family, who have said they handed over hundreds of threatening messages to the force.

The Alsoufis have linked those threats to a September event in Hamilton featuring People's Party of Canada Leader Maxime Bernier that drew a crowd of angry protesters -- reportedly including the family's eldest son.

Media reports said Alaa Alsoufi was among the demonstrators at the Sept. 29 event, video of which showed masked protesters blocking the path of an elderly woman who used a walker.

But the customers who showed up to Soufi's when it reopened Friday morning were supportive of the family, saying no one should feel threatened.

The head of a local Middle Eastern restaurant chain, Paramount Fine Foods, has offered to run the eatery until the owners feel safe again.

Mohamad Fakih has said the Alsoufis will retain ownership and receive all the profits.