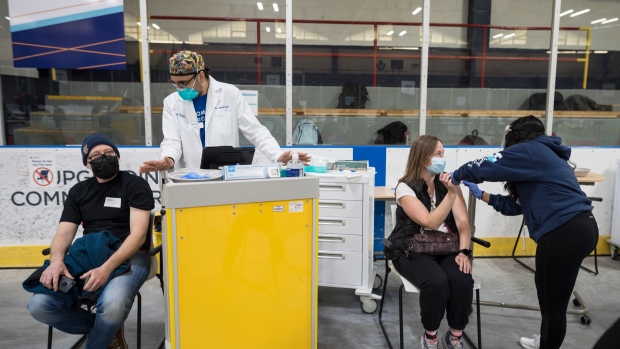 The city of Toronto is adding more than 60,000 appointments for the next three weeks after the province expanded eligibility for the second dose of the COVID-19 vaccine.

In a news release issued Thursday evening, the city said the new appointments will be available at eight of its mass immunization clinics between June 14 and July 4. They will be offered through the provincial booking system starting on Monday, June 14 at 8 a.m.

With the additional appointments, the city said it would be administering about 180,000 first and second doses during those three weeks.

“We are working to make sure as many Toronto residents as possible get their first dose and get their second dose. We know the only way this pandemic will truly come to an end is with the protection of the COVID-19 vaccines,” Mayor John Tory said in a statement.

“So thank you to all the residents who have already stepped forward to get vaccinated and I continue to urge people to get their first shot and then get their second shot.”

The additional appointments come after the province announced the same day that it is accelerating second shots for those in hot spots where the Delta variant, which first emerged in India, is prevalent. They include Toronto, York Region and Peel Region.

Starting on Monday, those who received their first dose of the mRNA vaccines on or before May 9 can book their second dose.

Currently, individuals 70 years of age or older and anyone who received their first dose of AstraZeneca more than 12 weeks ago are eligible to book their second dose.

The city said mobile and pop-up clinics will be refocusing their vaccination efforts in these neighbourhoods, providing access to first and second doses.

“The sprint strategy will continue prioritizing access to first dose, but also serve as a low barrier access channel for getting second dose vaccine to these hot spots to increase the protection of residents most at risk of contracting COVID-19,” the city said in a statement.

More than 2.5 million doses have been administered in the city to date, with more than 73 per cent of adults receiving their first dose.