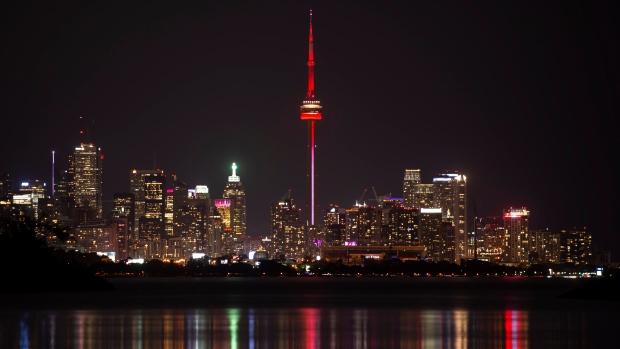 The CN Tower is lit up in red and white for Canada Day in Toronto on Monday, July 1, 2019. THE CANADIAN PRESS/Andrew Lahodynskyj

With in-person celebrations canned due to the COVID-19 pandemic, the city of Toronto announced it will be hosting a livestream show to mark Canada's 153rd birthday.

Called Canada Day 2020, the city said the July 1 show will feature a mix of live and pre-recorded performances from more than 50 Canadian artists, which will be streamed on YouTube.

"I encourage Toronto residents to show their spirit and enthusiasm for the upcoming celebrations and for our great country by decorating their porches and their front doors and their balconies or their windows because I think it is your creativity and your energy that will brighten your whole street, your neighbourhood, and our whole city, and truly celebrate this great country that we're fortunate to live in."

In May, the city announced that all of its in-person Canada Day events, including firework displays would be cancelled due to the COVID-19 pandemic.

The city is also asking residents to nominate front-line workers who they want to recognize as part of RespectTO.

Tory said the nominated names will be broadcast throughout the show to honour their work during the pandemic. A maximum of 5,000 names will be accepted.

The city said the livestream will be divided into three segments.

The first one is called "The Great Canadian Pancake Breakfast," which will include a culinary exchange between Tory and MLSE Executive Chef Chris Zielinski, and greetings from Chief Stacey Laforme of the Mississaugas of the Credit First Nation.

In the afternoon, there will be a "Culture Jam," which the city said will showcase dozens of diverse Toronto artists, highlight neighbourhoods across the city, offer interactive family-focused programming and commemorate the national anthem's 40th anniversary through a special performance of "O Canada."

To cap the celebrations, "The Ready for Prime-Time" segment will offer live and pre-recorded performances by high-profile Toronto artists. The city said many of the performances will be from the iconic El Mocambo.

Tory noted the show is co-produced by Harbourfront Centre with additional support from TO Live as well as many community and cultural organizations.

The CN Tower will also put on 15-minute light show set to the music of Canadian artists. It will be streamed at cntower.ca

"I encourage everyone to participate in our virtual Canada Day and to help us connect to each other as a city," Tory said.

"This Canada Day is unlike any other, but it is no reason not to celebrate and to show our Canadian pride."