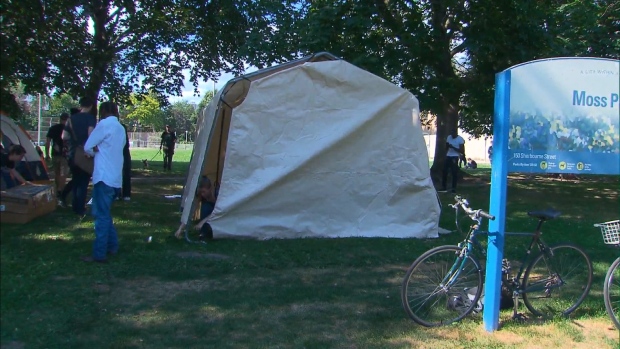 The City of Toronto has reportedly notified a group of people living in tents in Moss Park that they may be evicted as soon as tomorrow, according to an anti-poverty organization.

The Ontario Coalition Against Poverty (OCAP) released a statement Monday saying if the residents fail to leave prior to 10 a.m. on Tuesday then they could face a fine of $10,000 each.

As a result, 14 encampment residents, OCAP, and the Toronto Overdose Prevention Society (TOPS) are suing the city to prevent the eviction of all encampments without supplying adequate and acceptable accommodation.

“I don’t like how they deal with people in the park,” said Moss Park encampment resident Derrick Black in a press release from OCAP. “The enforcement is too much. I’m not moving until I get housing. I’m tired of the promises.”

City spokesperson Brad Ross said Monday night that the city is aware of a planned injunction regarding the clearing of encampments and said they will respond to the application “at the appropriate time.”

Toronto Mayor John Tory commented on the Moss Park encampments at a news conference today and said city staff have been moving encampment residents into indoor spaces even before the pandemic started out of concern for their health and safety.

“We do not believe that encampments over a lengthy period of time are properly placed in public parks or other pieces of property like that," said Tory. "And that is for reasons of safety...in terms of some of the fires and even deaths that we’ve seen, and from the standpoint of public health and just from the standpoint from the use of that public land.”

Ross said those living in encampments face a number of increased health and safety issues, including possible overdose, open flames, generators, propane tanks, and lack of access to water and sanitation.

Since April, the city has moved at least 550 people from 43 encampments to indoor spaces, such as interim housing and hotels, according to a press release issued last week. This includes at least 121 people who have been staying in and around Moss Park.

During the COVID-19 pandemic, the city said, outreach teams have been approaching people sleeping outside to offer them access to inside spaces in advance of any move of an encampment site.

The city said that if an offer to access these supports is refused, a notification of encampment clearing is issued and the site is cleared by city staff and contracted services.

“Camping outdoors in parks and rights-of-way is prohibited in the city of Toronto,” reads a statement from the city.

“The city has implemented rigorous Infection Prevention and Control (IPAC) measures at all city-run and funded sites in the shelter system to minimize the spread of COVID and protect clients.”

“Displacing people living in the encampments in Moss Park and elsewhere is cruel,” said Zoe Dodd, from TOPS in a press release. “There has been no space in shelters for months, and there have been continuous COVID outbreaks- it’s safer to be in a tent.”

OCAP said more than 617 positive COVID-19 cases have been confirmed in city shelters, with 38 different outbreaks and at least four deaths.

In addition, OCAP says many of the hotel shelter rooms offered by the city are often far from where encampment residents have been living and where their necessary supports are.

“As we move into the fall and anticipate mass evictions, the city has no plan for where to put people,” OCAP organizer A.J. Withers said in a press release. “Yet, it is attacking the small amounts of security people have and that these encampments have created: tents and community.”

Residents at an encampment in Moss Park have reportedly been given notice that they could be evicted on Tuesday.

Residents at a encampment in Moss Park.